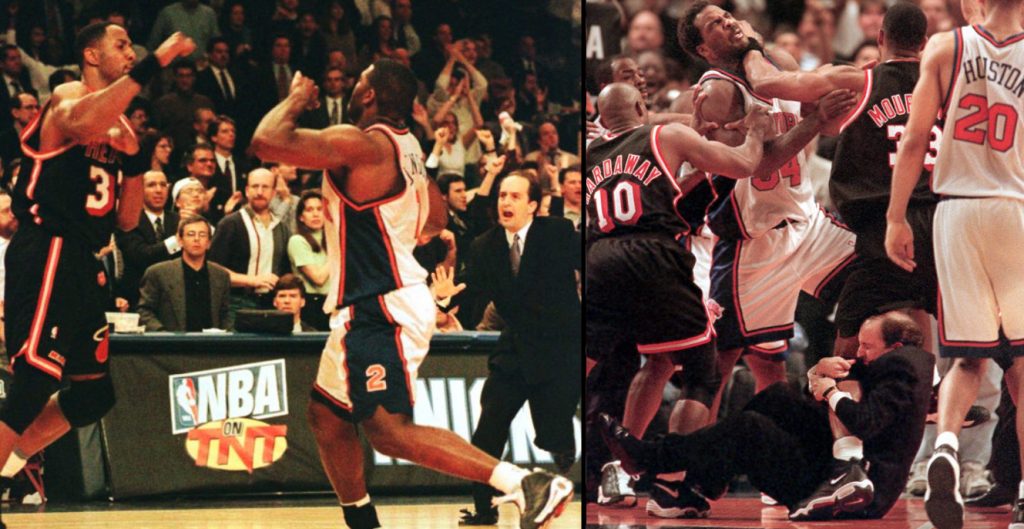 20 years ago today, one of the greatest NBA fights of all-time happened…despite ZERO punches landing. The two main fighters in the ring were the Knicks’ ...(Read more)

20 years ago today, one of the greatest NBA fights of all-time happened…despite ZERO punches landing. The two main fighters in the ring were the Knicks’ Larry Johnson and Heat’s Alonzo Mourning. The two former Hornets teammates were more than just star players on rival teams, they were two of the league’s biggest badasses and they really hated each other.

The drama goes back to their Charlotte days, when Zo would publicly complain about how much money LJ was making (his $84 million contract in 1993 had the shock value of a 2016 Grizzlies signing) while LJ was slowly seeing fewer touches and shots as Zo became one of the premier centers in the league and the Hornets’ best offensive and defensive weapon. You would think a fight between LJ (who used to box in the Police Athletic League and had the body of Men’s Health cover model) and Zo (who had the body of the guy who should have been on the Men’s Health cover but didn’t get it because he’s not likable) would be a fight that Charles Barkley and Oakley would be proud of. That wasn’t the case at all.

In the final quarter of Game 4 of the 1998 series between the Knicks and Heat, the two got tangled up and took turns throwing punches and missing by inches. Knicks coach Jeff Van Gundy and player Charles Oakley tried to restrain Zo; Oakley took the top and Gundy took the bottom — by hanging on to his leg as my dog does to house guests or as Chris Mills said: “like a jockey who fell off his horse and held on for dear life.”

”Jeff was doing what every other coach in this league does, going in there trying to break up a fight,” Knicks GM Ernie Grunfeld said. ”Unfortunately, he got stuck in the land of the giants.”

Equally funny to Van Gundy riding a giant’s leg was commentator Doc Rivers (known for fighting Celtics in the 80s) hilariously saying, “Fortunately for these guys, they are both awful fighters” during the live telecast.

The Knicks did win the game but were told by the league they were going to lose LJ for their next two and also Chris Mills, who got a one-game suspension for leaving the bench. The suspension left the Knicks with just nine available players. Lucky for them, the league also suspended Zo for two games.

Thanks to a big game from Allan Houston (30 PTS) and a throwback performance from John Starks (22 PTS), the Knicks easily beat the Heat 98-81. If you were wondering how Zo’s starting replacement did in the game, Duane Causewell finished with 0 points and 2 rebounds.

This wasn’t the only time Van Gundy had an embarrassing moment trying to break up a fight. In 2001, Van Gundy jumped in front of Marcus Camby as he threw a wild sucker punch at Danny Ferry. Van Gundy took a head butt from Camby but prevented what could have turned into a Kermit Washington situation.