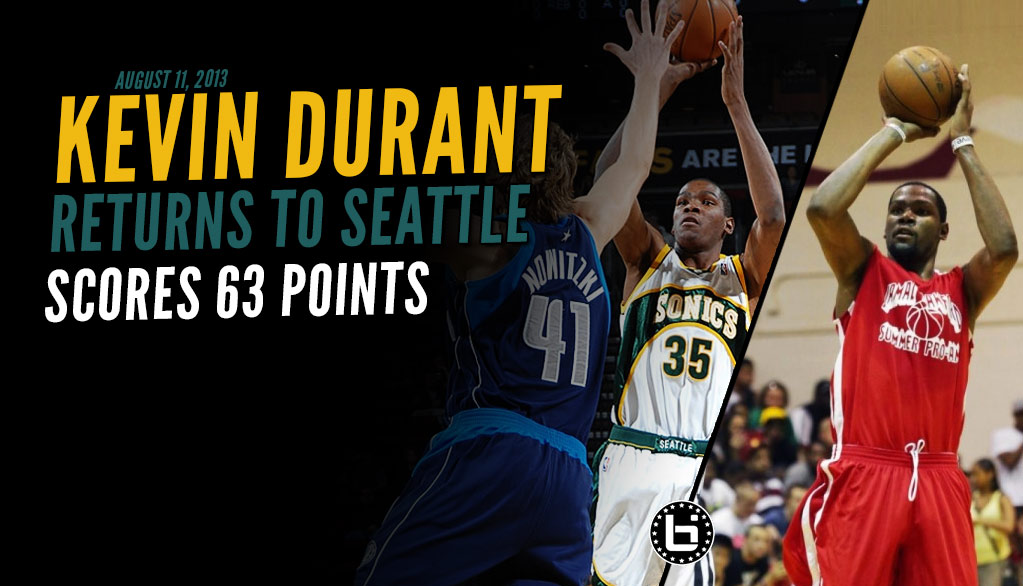 “I just want to say I miss you guys,” said Durant to the crowd, after scoring 63 points in the Jamal Crawford/Seattle Pro-Am. “Thank you for ...(Read more)

Remembering When Kevin Durant Returned To Seattle And Dropped 63 Points

“I just want to say I miss you guys,” said Durant to the crowd, after scoring 63 points in the Jamal Crawford/Seattle Pro-Am. “Thank you for the warm welcome. I can’t wait to come back.”

Let’s back up a little and go back to 2007, when I vividly remember David Stern saying, “With the first pick of the 2007 NBA draft, the Portland Blazers fucked up and are giving the Seattle SuperSonics a future Hall of Famer and one of the best scorers the league will ever see.”

OK, the commish didn’t say those exact words but that’s what he meant when he said Portland was taking Greg Oden with the top pick, leaving Seattle to select 18-year-old Kevin Durant.

The good news for the people of Seattle couldn’t have come at a better time since they were still in near riot mode after hearing the Sonics traded Ray Allen for an injured Wally Szcerbiak (damn!), Delonte West (Goddammit!) and the 5th pick (eh!) in the draft, just minutes before Seattle selected KD.

From the start, the Jesus-less Sonics was a one-man show and it was headlined by Durant. He scored 18 points in his NBA debut and never looked back with 30 here, a game-winner there, and for the finale, he put up a career-high 42 points and 13 boards against the Warriors. His season average of 20 points per game was seven more than the second leading scorer (Chris Wilcox) on the team, good enough for Rookie of the Year honors and rare enough to be put on a short list with Carmelo Anthony and LeBron James as the only teenagers to ever average 20+ over a season.

Two days after KD dropped 42 on his future team, the NBA owners (minus Mark Cuban and Paul Allen) dropped a bomb on Seattle by approving the relocation of the Sonics to Oklahoma City. It was a move that was two years in the making after a group of OKC businessmen — led by “Seattle Supervillain” Clay Bennett, who was booed throughout the last home game in Seattle – bought the franchise back in 2006.

For the next few years, angry and basketball-starved fans in Seattle watched the teenager they once cheered for turn into a man among boys, a perennial All-Star and league scoring leader from 2019-2012.

Then on August 11th of 2013 — half a decade after his last game as a Sonic — Kevin Durant returned to Seattle, on his own dime (private jet), to play in the Seattle Pro-Am (then known as the Jamal Crawford Pro-Am). Over 3,000 fans packed the Seattle Pacific University gym to welcome the last great Sonic back.

After the game, he signed as many autographs as he could before trying to escape to his SUV, which was hidden behind hundreds of others waiting fans. He signed more autographs, took more pics and then said goodbye with this tweet.

I love and miss Seattle…damn

But of course, some people still had to have something negative to say. The following day after KD’s return to Seattle, Skip Bayless said on ESPN’s First Take he was “embarrassed” for KD. Stephen A. Smith defended KD, called him a future Hall of Famer and said he will probably never shoot that bad again.

On opening night of the following season, Kevin Durant dropped 42 points in a win against the Jazz and put up five 30+ games in the first seven games of the season. A season that included a 54- point performance on 19-of-28 shooting and ended with an MVP award and one of the most emotional MVP speeches ever.