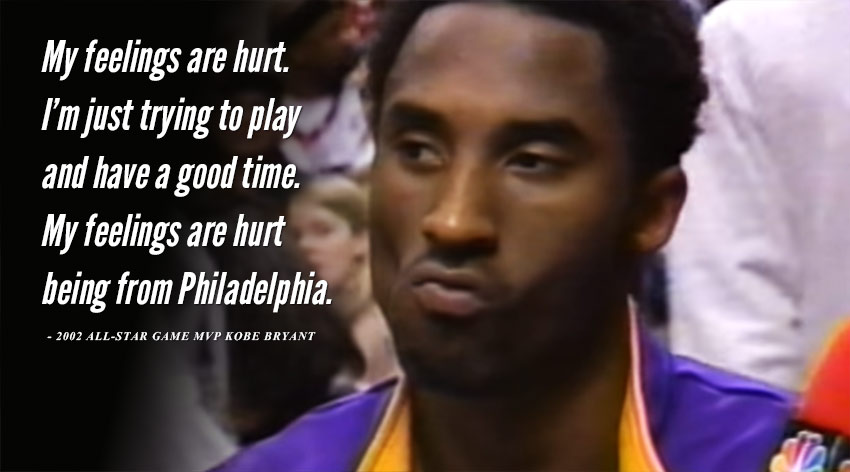 Kobe Bryant showed up to the 2002 All-Star weekend in Philly proudly wearing his Dad’s 76ers jersey and a big smile on his face. Everybody expected the ...(Read more)

Kobe Bryant showed up to the 2002 All-Star weekend in Philly proudly wearing his Dad’s 76ers jersey and a big smile on his face. Everybody expected the Lower Merion product and NBA champion to put on a show for his family and hometown friends and fans.  What nobody, Kobe himself, expected was for him to be booed from the moment his name was announced before the game to the moment when he held up the first of his four All-Star game MVP awards.

“I was pretty – pretty upset,” Bryant said about the hometown boos. “Pretty hurt. I just wanted to go out there and just play – just play hard. But they booed, and, you know, I still like coming home, though. I still enjoy playing in Philly nonetheless.”

The probable reason why the Philly fans didn’t appreciate Kobe’s MVP performance – 31 points, 5 boards and 5 dimes in 30 minutes as he led the West to a 135-120 victory –  was because his voice saying he was coming to Philly to “rip the fan’s heart out” before Game 5 of the 2001 NBA Finals was still fresh in their heads.

“I felt bad for him,”Said 76ers Allen Iverson, who was the All-Star MVP in the previous year. “I felt real bad because, at a happy moment, a happy time like that, you just want to enjoy it. Then, by them booing him, it took a lot away from it because he is from here.”

Michael Jordan also talked about the booing after the game.

“He cares about the way people perceive his attitude about the game of basketball. I’m definitely supportive of the way he goes out and is aggressive. I feel bad that he’s embarrassed by it.”

But the quote of the night came from the West coach, Don Nelseon.

“Don’t take it personal,” Nelson told him. “They wish they had you. Forget about it.”

Now let’s flash forward almost 14 years after that day to December 1st of 2015, when the 76ers honored Kobe with a warm reception and an emotional tribute video during his “farewell game” in Philly.

He finished the night with 20 points on just 7 of 26 shooting, but he had the crowd finally chanting “MVP.”