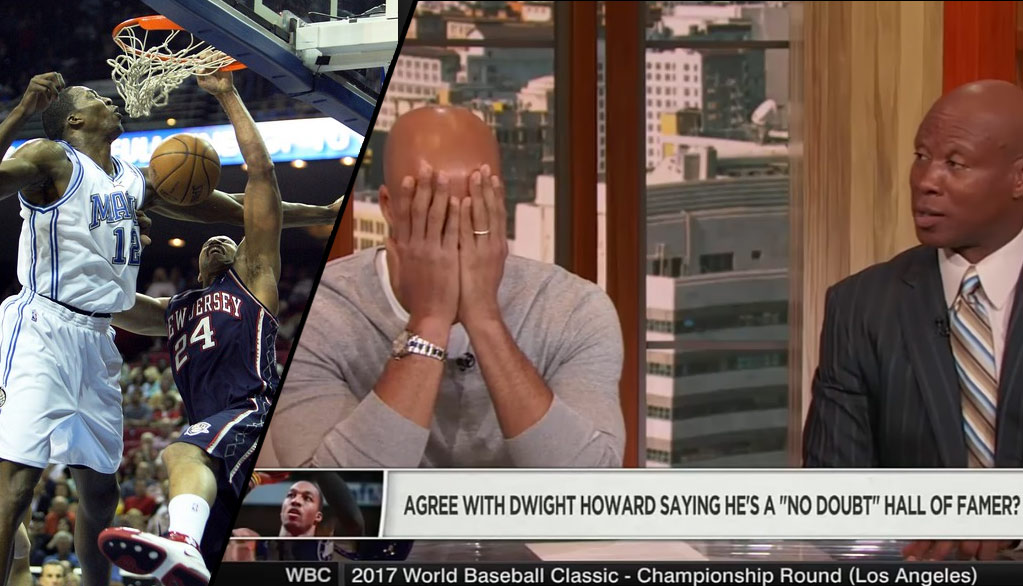 In a recent interview with The Undefeated, Dwight Howard said, “No doubt” when asked if he thought he belonged in the hall of fame. “No doubt. ...(Read more)

In a recent interview with The Undefeated, Dwight Howard said, “No doubt” when asked if he thought he belonged in the hall of fame.

“No doubt. It’s kind of got swept under the rug because the perception of all the things that happened in Orlando. All of the media stuff,” Howard said. “If you look at basketball itself, and I don’t ever talk about myself, but winning three Defensive Player of the Year trophies has never been done. Leading the league in rebounding six straight years. All that kind of stuff, I think that deserves it.”

On Monday’s episode of ‘The Jump,’ Rachel Nichols, Byron Scott and Richard Jefferson discussed the bold statement from the 8x All-Star and 5x All-NBA First Teamer, who has created a pretty awful reputation since his early and dominant years in Orlando. They first pointed out there’s been a few guys who have won three or more DPOY awards and if Terrell Owens isn’t in the football hall of fame for political reasons, then there’s a good chance the unpopular Howard wont get into the basketball hall of fame, even though “people have gotten in with less and his career isn’t over.”

One person who has very strong opinion on this question is longtime Boston Globe writer Bob Ryan. Back in 2015, here’s what he had to say about Howard’s chances.

“He’s not even one of the 15 best centers of all time. I can name 15 guys I’d rather have. He’s the biggest waste of space, of misplaced priorities I have ever seen. He’s got the body, He’s got the rebounding skill, He’s got the shot blocking skill, and he just does not capital G, get, capital I, it.”

Ryan added if Dwight “gets it” in Houston and Coach Kevin McHale is able to “unlock the mystery of Dwight Howard” then he might change his mind. Well, his tenure in Houston wasn’t the most pleasant and despite flashes here and there, he looked like a shell of the player who led the league in rebounds for five seasons and blocks for two.

So far Dwight has been having a drama-free season back in his hometown of Atlanta but is averaging a career-low 13.1 points per game and blocks (1.3) to go with 12.8 boards.