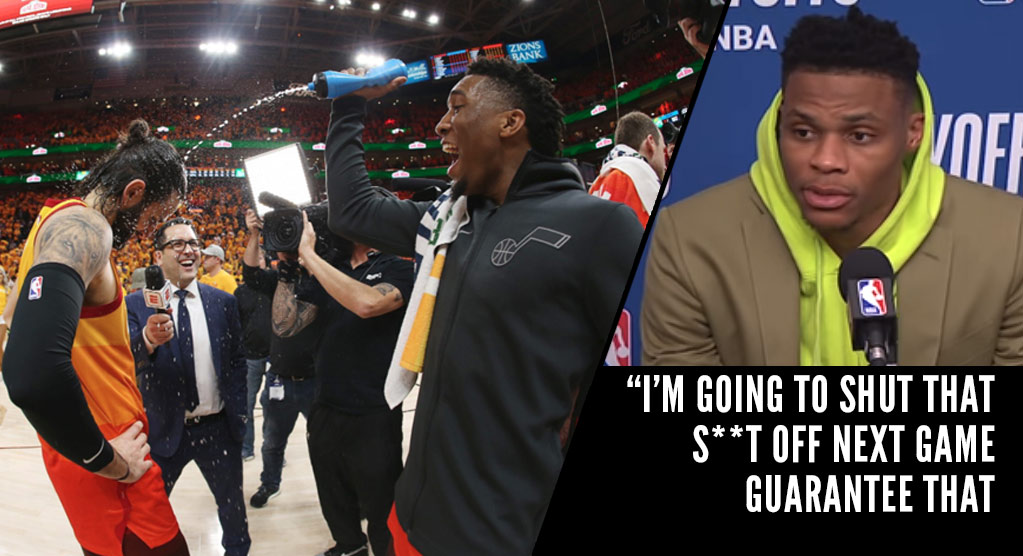 The triple-double King, Russell Westbrook, fell one assist short of getting another triple-double in the Thunder’s 13-point GM3 loss to the Jazz on Saturday. The Jesus ...(Read more)

Ricky Rubio Triple-Doubles, Westbrook Guarantees He’s Going To “Shut That $#it Off Next Game”

The triple-double King, Russell Westbrook, fell one assist short of getting another triple-double in the Thunder’s 13-point GM3 loss to the Jazz on Saturday. The Jesus of Utah, Ricky Rubio, did get 10 assists and a triple-double (26 PTS, 11 REB, 10 ASTS). It was the third triple-double in franchise history and first since John Stockton did it 17 years ago (Rickey Green was first in 1984).

“Having my name next to his name is an honor,” Said Rubio, wearing a shirt with the FRIENDS tv show logo while cracking a joke about not speaking English. “I don’t know what to say. It’s huge. I have huge respect for him. I feel great.”

Respect is something Westbrook didn’t have Rubio during his postgame interview.

“He made some shots. Too comfortable. But I’m going to shut that shit off next game thought. Guarantee that.”

There’s not many safe guarantees during the playoffs but I would feel comfortable making a bet that Westbrook will win the individual statistical battle with Rubio in GM4; I would NOT comfortably make a bet that this personal accomplishment will help his team win, especially if he continues to shoot 35% or if he has 8 turnovers with 9 assists again…or if OKC continues to let the real Rookie of the Year and Slow-Mo Joe continue to put up 20+ points while Rudy Gobert double-doubles.