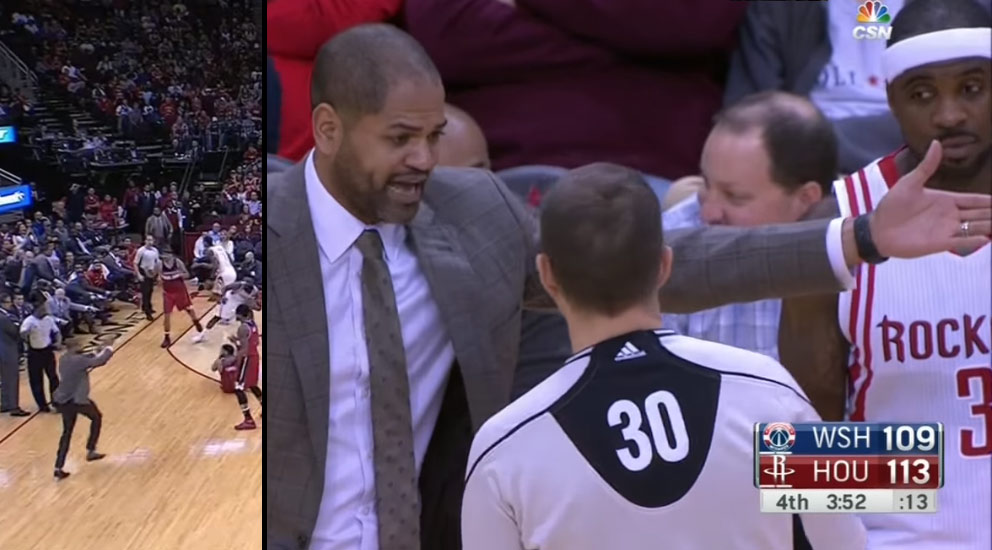 The Rockets would have been better off with the travelling turnover.  With 4 minutes left in regulation, Rockets coach J.B Bickerstaff was hit with a tech for ...(Read more)

Rockets coach J.B. Bickerstaff gets a tech for running onto the court to call a timeout

The Rockets would have been better off with the travelling turnover.  With 4 minutes left in regulation, Rockets coach J.B Bickerstaff was hit with a tech for running onto the court and yelling for a timeout. Beal hit the technical free throw and then the Rockets turned the ball over after the timeout.

After the 1 point loss, Bickerstaff vented about the refs, in particular how they are treating Dwight Howard, who was ejected in the 4th after receiving a 2nd tech for pushing Nene.

“These referees need to be held accountable for letting people attack Dwight and be that physical with him,” Bickerstaff said. “And dirty. It’s not physical. If they let Dwight be physical and the game be clean, that’s one thing. But, they’re not clean with the way they play.

“We don’t mind being physical. We’re not afraid of that, but cheap is one thing. Playing to grab somebody’s shoulders. Grab somebody’s arms. That’s not clean basketball. And, it’s not just tonight, but tonight is just an example of it.”