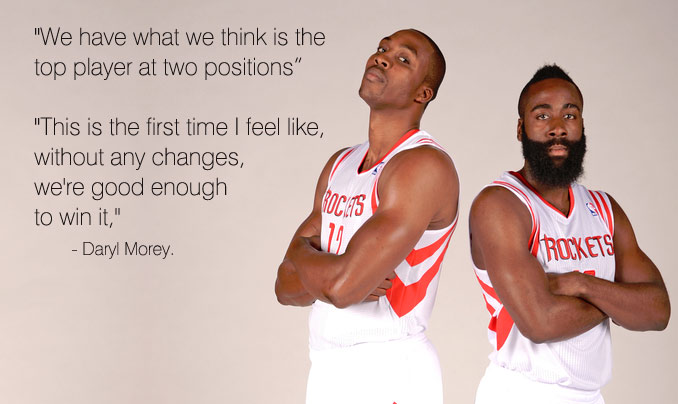 This season will mark the 10th Daryl Morey has been with the Rockets (9th as the GM) and according to a recent interview with the Houston ...(Read more)

This season will mark the 10th Daryl Morey has been with the Rockets (9th as the GM) and according to a recent interview with the Houston Chron, he’s feeling pretty good about his roster and odds of them winning a championship this season.

“This is the first time I feel like, without any changes, we’re good enough to win it,” said Morey.

He would go on to say “historically, championship teams have two or three elite-level players, and they’re usually together for a bit”  and then said he believes his team has not only 2 elite players but the most elite at their positions.

“We have what we think is the top player at two positions (Harden and Howard), and we have very, very solid pieces to work around them all the way to players eight through 10.”

Morey is so confident in the current roster that he plans on keeping the team pretty much the same even if they don’t win a championship this season.

“If this year we don’t make it as far as we want, which is all the way to the LOB (Larry O’Brien trophy), I would expect to bring most of this group back, because the group we assembled is good enough to win.”