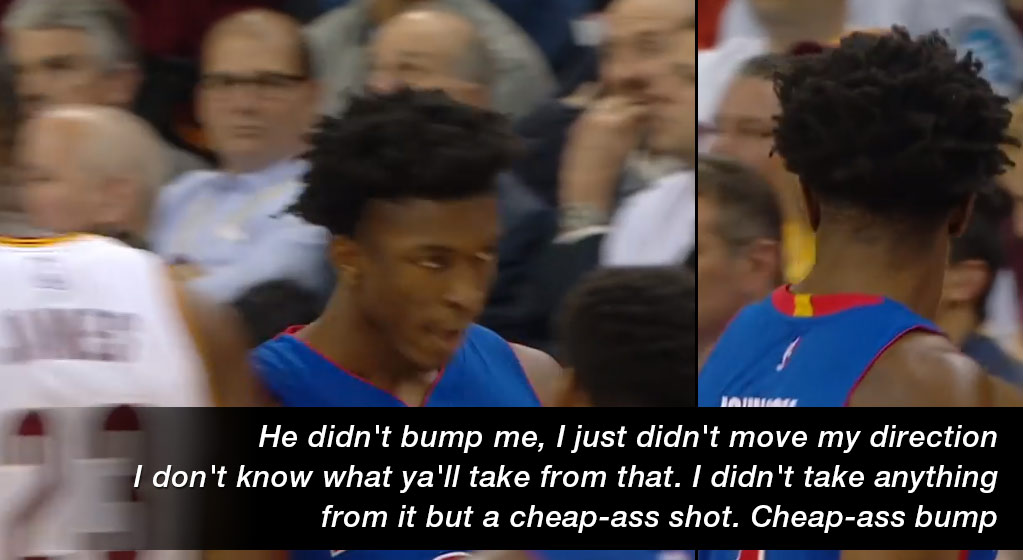 In game 1, the fearless and always quoatable 19 year old Detroit rookie Stanley Johnson made some noise with his impressive and physical defense on LeBron James. ...(Read more)

In game 1, the fearless and always quoatable 19 year old Detroit rookie Stanley Johnson made some noise with his impressive and physical defense on LeBron James.

After game 2, Johnson made some comments about LeBron, who scored a game-high 27 points, which is sure to generate a lot more internet noise until game 3 in Detroit, especially his comments about a bump they shared in the first quarter.

“He was walking away, I walked on a straight line,” Johnson said of the bump. “He didn’t bump me, I just didn’t move my direction. I don’t know what ya’ll take from that. I didn’t take anything from it but a cheap-ass shot. Cheap-ass bump.”

Here’s a few other memorable postgame quotes from Johnson.

“I could care less if I’m in his head or in his mind or anything like that,” Johnson said. “I’m just trying to play basketball. It’s up to him how he wants to react to whatever he does. I think I’m in a good place. He had a great night. He’s had a couple great nights. He made a couple tough-ass shots.

“I wish he would just talk when he’s like zero-zero, not when he’s up 16 and already got it going. That means something. That means you’re more confident in yourself. You believe what you’re about to do. Don’t talk after you’ve made a couple of shots. Anybody can do that.

“He jabbers, he moves his mouth some time. The whole team does like they’re little cheerleaders on the bench anytime you walk in the right corner. They’re always something like they’re playing basketball in the game. Only seven or eight players play for them. I don’t see why the others get talking. They might as well just be in the stands.”