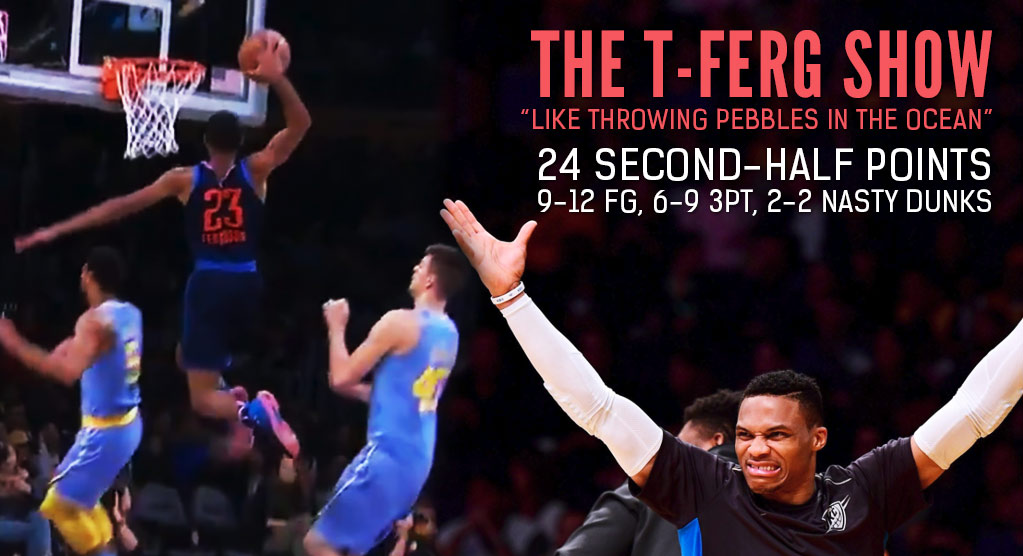 Terrance Ferguson got the start for Andre Roberson on Wednesday and by the end of the game, he had his name trending on Twitter. Why? Because ...(Read more)

Terrance Ferguson got the start for Andre Roberson on Wednesday and by the end of the game, he had his name trending on Twitter. Why? Because the high-flying OKC rookie threw down a pair of SportsCenter Top 10 dunks on his way to a career-high 24 points…all in the second half of a 133-96 beatdown on the Lakers.

I also said a couple of years ago he has a chance to do what Michael Jordan, Kenny Smith, and Damian Lillard unsuccessfully tried to do in the past: win both the NBA dunk and 3-point contest.

You might be thinking I’m overreacting to Ferguson knocking down 6-of-9 threes in a half but I remember watching him win a 3-Point contest at the Under Armour Elite 24 event and knocking down a record 7 treys at the 2016 Nike Hoop Summit. I’ve also had the pleasure of watching the super thin baller casually drain so many threes during our All-American game practice that I lost count. I’ll even go as far as saying if you had bad eyesight, you might have thought you were watching a more vertically-blessed Kevin Durant during that practice.

“Like throwing a pebble in the ocean,” Said Ferguson after his career-night. “Pretty good night.”