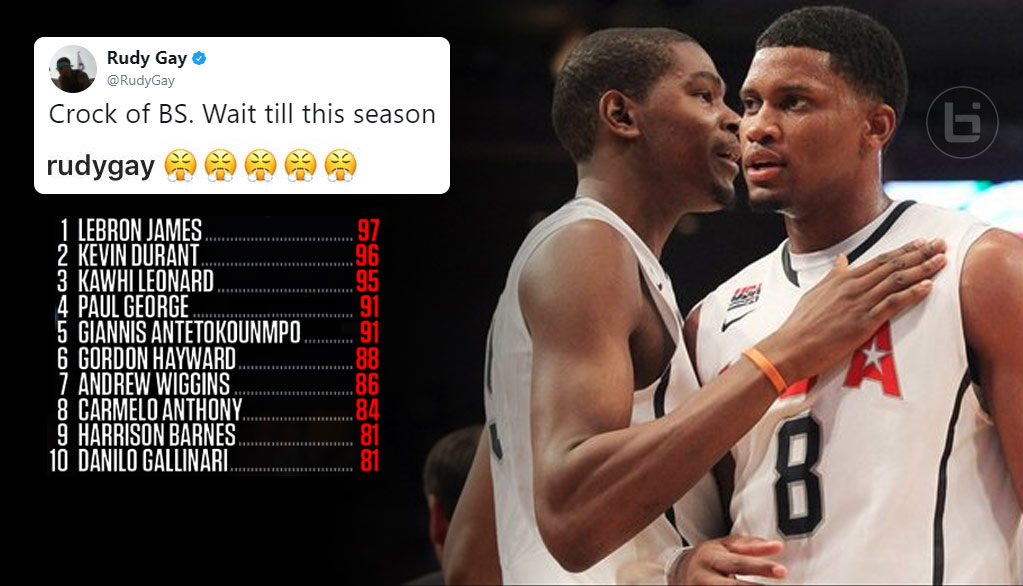 Late Tuesday afternoon, we reposted NBA2K’s top 10 small forwards in 2K18 on our IG account. The two most common questions we kept seeing on the ...(Read more)

Rudy Gay Gets Pissed At NBA2K, Props From Kevin Durant 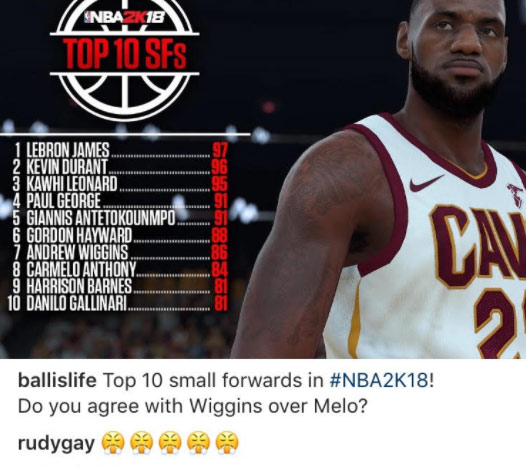 Late Tuesday afternoon, we reposted NBA2K’s top 10 small forwards in 2K18 on our IG account. The two most common questions we kept seeing on the post was, “Why is Andrew Wiggins over (no hoodie) Carmelo Anthony?” and “Where is Rudy Gay?” The new San Antonio small forward joined the conversation and expressed his anger with a few emojis.

He later went to Twitter to elaborate on how he felt seeing his name left off a list with Harrison Barnes and Danilo Gallinari on it.

“Crock of BS. Wait till this season.”

The tweet got a “LOL” from Damian Lillard and a couple hundred comments from supporters who felt Gay should have been at least an 81 . He only played 30 games for the Kings last season due to an Achilles injury but scored 20+ in half of them, including a 30 & 12 and 29 & 14 game. He also had a 22/8/8 performance and back-to-back games with 4 blocks.

Gay did get some respect earlier in the week. During Kevin Durant’s latest appearance on The Ringer’s Bill Simmons podcast, KD was asked about players that used to give him the most problems and he named Gay, who was averaging over 20 points a game for the Grizzlies when KD entered the league.

During their first meeting — KD’s fifth game of his career — Gay had 25 points on 8 of 19 shooting and 10 boards, while KD missed 14 of his 17 shots and finished with 17 points. They met again later in the month and it was another L for KD’s Sonics as he struggled again, hitting just 2 of 8 shots.

KD has had his share of payback games over the past decade but Gay is still giving him buckets too. Here’s a 2015 throwback game with the two small forwards going for 20 a piece.

During the Simmons’ podcast, KD was also asked if he’s ever been happy with his 2K rating and his response was, “It can change. Once you have a nice week it will change so get some buckets.”

So there it is Rudy, just treat defenders like you used to treat a young KD and your rating will change.