If we want to get technical, 99% of 360 dunks done in games and dunk contests have been closer to 180 than a 360 and 540 dunks we have seen are closer to 360 and 720 is closer to 540.  But we aren’t trying to be stingy with the degrees so we are going by acceptable degrees. We as in not the NBA Youtube guys who wrote “Rudy goes baseline for the 180 dunk against the Cavs” instead of “LeBron looses Rudy Gay who goes baseline for the 360 dunk.”

If you read the YouTube comments for this video you will see that most of the angry comments are in agreement especially LaMidrange Aldridge (great name) who said “360 dunk fix that shit NBA. If Lebron did a 90 degree dunk NBA would have said it was a 720 dunk. Thats how much the NBA dickrides Lebum James.”

Let’s see how much he’s exaggerating by looking at some 360 dunks by LeBron that the NBA posted.

How about Terrence Ross?

How about Nick Young? 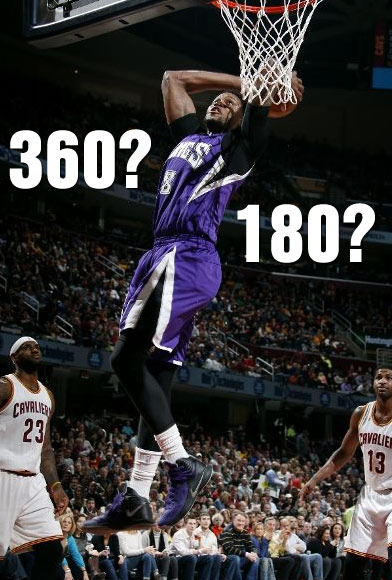