During the 2nd quarter against the Lakers, Russell Westbrook was called for a flagrant foul 1 on Luol Deng and almost went into psycho mode after Deng started walking directly behind him for a few seconds before tapping him on the back. A pissed off Westbrook turned around and started yelling/cursing at the vet until a ref stepped in. The reason why Westbrook was so mad in the first place is because he felt he was fouled on his last shot. Since the basketball Gods and spirit of Rasheed Wallace were on Westbrook’s side, Deng missed both free throws. 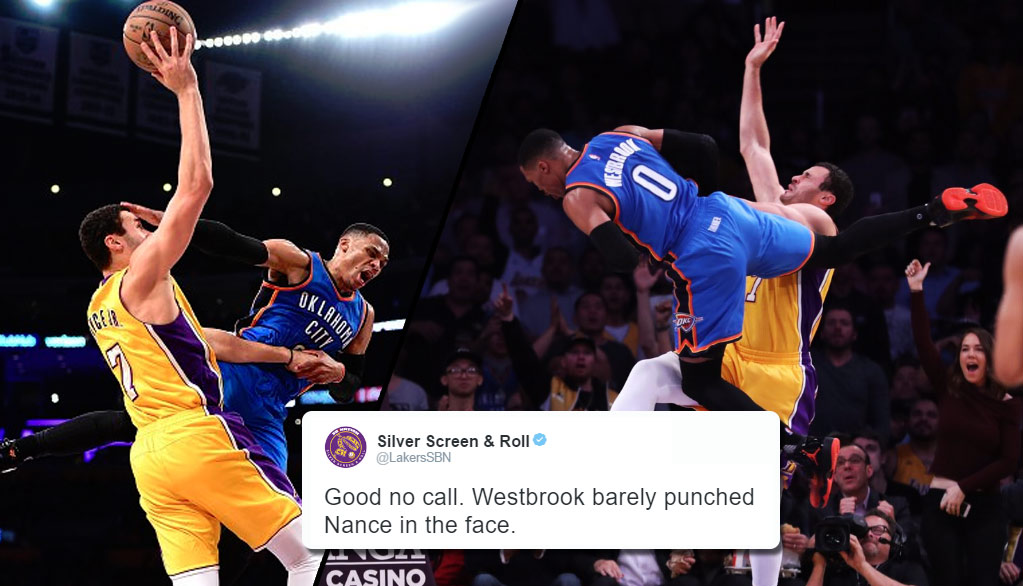 Since the Lakers had the spirit of the Black Mamba and Swaggy P on their side, they got payback in the form of a game-winning three by Nick Young.

Westbrook was so impressed and such a good sport after the loss, he even dressed like a member of the Lakers! I’m obviously kidding.

On the surface, it looks like Westbrook had another great game: 34 points, 13 assists, 8 rebounds and 2 steals.  Then you realize he missed 17 of those 30 shots and 17 is four more shots than any of his teammates took. He also turned the ball over eight times to get those 13 assists. Now those numbers in the loss don’t seem as impressive….actually, they still do. And because of those numbers, he’s now leading the league in scoring (31.8) while averaging 10.6 assists and 9.5 rebounds.  That’s really impressive!