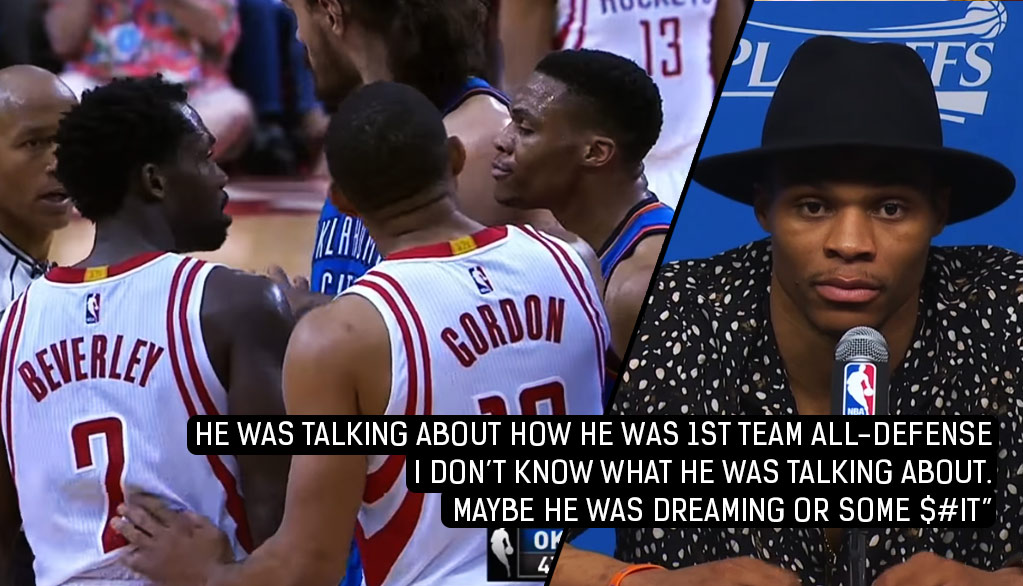 Who else wishes Russell Westbrook and Patrick Beverley could play each other every week? The two feisty guards have a long history against each other and ...(Read more)

Who else wishes Russell Westbrook and Patrick Beverley could play each other every week? The two feisty guards have a long history against each other and midway through the fourth quarter of Westbrook’s final game of the season, the two got into each other’s faces, talked some smack, exchanged some meme-worthy faces and were hit with techs since they play in the soft a$$ league that is the 2017 NBA.

After the 105-99 Rockets’ victory, each took some amusing final jabs at each other.

“That was actually the first time we’ve exchanged words this postseason, but he’s a really good player. … It was shocking because he looked up and said no one can guard me, I got 40 points. That’s nice, it took 34 shots to get it. I’m not out here trying to bash anybody but I mean, men lie, women lie, the numbers don’t. Collectively as a unit, we’ve done a great job on him, we’ve tried to make him shoot a lot of tough shots, and the numbers show.”

All I know is I’m dreaming about the next playoff series between these two. So in honor of Mr Triple-Double and his H-Town nemesis, here’s some of my favorite moments between them.

THE BEST OF WESTBROOK VS BEVERLEY