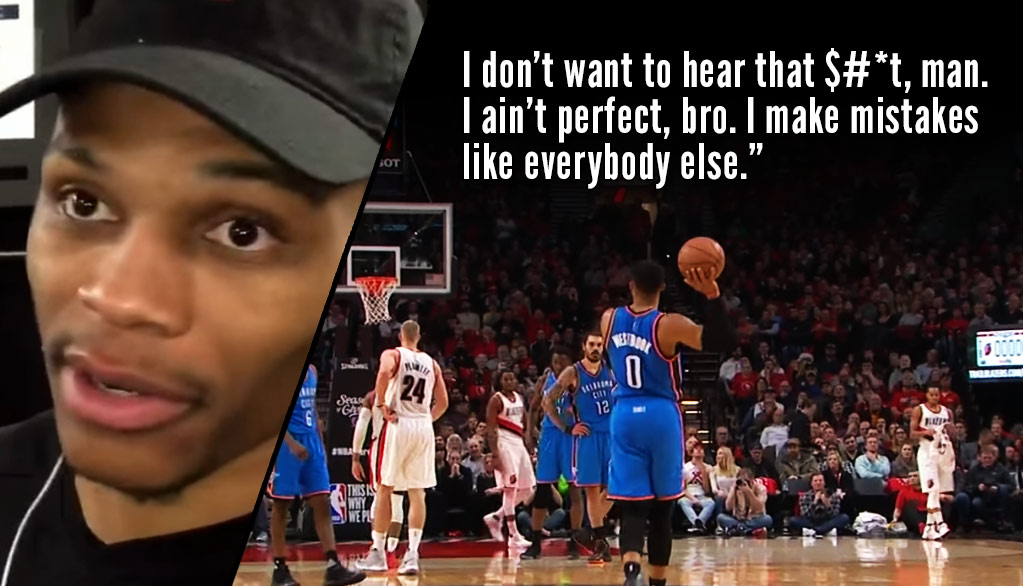 Enes Kanter tried his best to hide Westbrook after Russell hit a ref in the head with a ball but it was another ref who saw ...(Read more)

Enes Kanter tried his best to hide Westbrook after Russell hit a ref in the head with a ball but it was another ref who saw the throw and gave him his 10th tech of the season; It was actually the 11th time the league leader in techs was whistled for one but two were rescinded earlier in the day.

After the loss, which saw Westbrook shoot an awful 10 of 31 from the floor, he explained why the hit was an accident.

“I called his name. He turned right at me and then looked away. I don’t know,” Westbrook said. “I don’t know what to tell you, brother. I really don’t. I’m not the type of guy … I would never, ever disrespect the game like that and throw the ball at the referee. I’ve never done it before. That’s just not even heard of in the game before. To get a tech, it’s crazy to me. But you take the good with the bad.”

Westbrook did take exception to a question about another rescinded tech earlier in the season, when he hit a stanchion against the Blazers.

“I don’t want to hear that s—, man. Come on, man,” Replied Westbrook, according to ESPN’s Royce Young. “I ain’t perfect, bro. I make mistakes like everybody else. The ball slipped in Portland. Don’t come up with that s—, man. Don’t do that.”