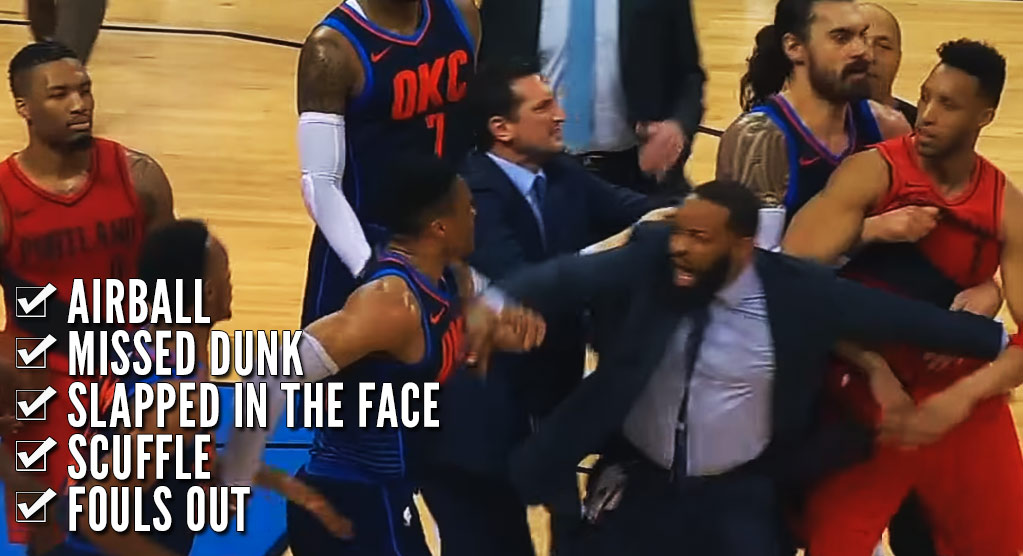 Russell Westbrook’s night against the Dame Lillard and the Blazers on Sunday is what you call a rough one. 2ND QUARTER Midway through the second quarter, ...(Read more)

Russell Westbrook’s night against the Dame Lillard and the Blazers on Sunday is what you call a rough one.

Midway through the second quarter, he airballed a three-point attempt. Lucky for OKC, bad azz Shabazz stepped out of bounds, the Thunder got another shot and Corey Brewer knocked down a three. Less than a minute later, Westbrook said forget this outside stuff, went for a breakaway dunk and ended up getting stuffed by the rim.

He did redeem himself by knocking down a three with 3.2 seconds left in the quarter.

At the 3.47 mark of the third, Westbrook tried to take Pat Connaughton 1-on-1 and felt the five fingers of Patty Fastball.

On the very next play, Westbrook committed an offensive foul and Connaughton tried to pour salt on the wound with a three of his own…he missed.

Seconds later, rookie Terrance “should have been in the dunk contest” Ferguson got into a little shoving match with the Blazers’ Ed Davis. Westbrook jumped in the middle and also shoved Davis. Evan Turner didn’t like what he was seeing so he ran in, pushed Ferguson and then gave Westbrook one of those “you don’t want none” looks when Westbrook ran up to him.

Westbrook, Turner, Ferguson and Davis were all hit with technical fouls and Westbrook took a seat on the bench.

Fast forward to the final minute of the game. With 1:10 left in regulation, Westbrook hits a jump shot to give the Thunder a one-point lead. After a three by Lillard, Westbrook responds with a layup to tie the game at 105-105. CJ McCollum responds with a jumper over Westbrook.

Down by two with 18.5 seconds left, Westbrook drives, kicks it out to Carmelo Anthony in the corner, Melo splits a double team, drives and passes the ball right into the hands of a Blazer. Westbrook commits a foul to get his team another possession and since that foul was his last, he would have to watch that last possession from the bench.

After a missed free throw by Al-Farouq Aminu, Corey Brewer grabbed the rebound and passed it to Melo, who pulled up for a deep three with four seconds on the clock aaaaaaannnddd…missed it.

After the game, Coach Billy Donovan defended his decision to let Melo take the shot even though he was just 3-of-12 before his final miss.

“Carmelo is a proven scorer in this league and has made shots — big shots — for a large portion of his career,” Donovan said. “I’ve got confidence in him. So we’ll go with him in that situation. That’s just how I felt.

Westbrook finished the game with 23 points, 9 assists and 8 rebounds. It was his third straight game without a triple-double after five consecutive ones.