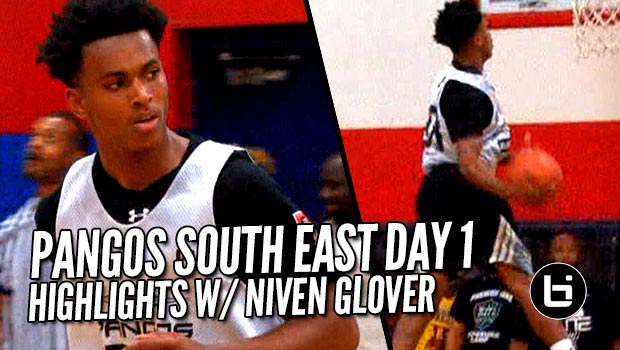 In a showcase camp setting, many times young players get caught up in the individualism of the game, or from their perspective, “trying to get a ...(Read more)

In a showcase camp setting, many times young players get caught up in the individualism of the game, or from their perspective, “trying to get a mixtape.” At the Pangos All-Southeast Frosh/Soph Camp, guard Samuel Griffin turned heads and “made the cut” by playing the game the way it was meant to be. Other day one standouts at the first-year event include wings C.J. Walker and Niven Glover.

The Pangos Frosh/Soph Camp tour hit a new region for the first time — the talent-rich state of Florida. When one thinks of Florida, football may be the first sport that comes to mind, but there is an abundance of hoops talent. With the event stopping in the Sunshine State for the first time, the overall number of camp participants was not high (60), so expectations were tempered. It also was a good opportunity for the players who did show up to get a honest evaluation from the media and scouts on hand, and as expected, a handful of standouts.

In a camp environment, one of the standout guards did something “new” to get the attention of the cameras — he played winning basketball and started his approach on the defensive end. Samuel Griffin, a 6-foot-1 sophomore (2019) point guard from Norland (Miami) won over the traditional media and scouts, and the BIL crew, by doing it the right way — playing aggressive defense and playing an unselfish brand of basketball on offense while making the correct reads.

“When you do the little things, it helps you on offense,” said Griffin, who started for the Vikings as a freshman and started playing at seven years old. “Playing for a state-title winning coach like Lawton Williams III gets you used to winning and you have to play hard.”

Watching Griffin, it’s evident he’s been taught the game well. He immediately finds his man and the ball on defense and quickly gets into help position when he’s off the ball. The well-built sophomore is also a hellacious rebounder and is arguably the most physical guard we’ve evaluated on the Pangos Frosh/Soph tour this fall in terms of boxing out and battling bigger players on the boards. He simply makes other guards not want it anymore.

Offensively, Griffin displayed deep range on his jumper and one of the best intermediate games among the campers. Because of Griffin’s smooth starts-and-stops, his pull up off the dribble is a lethal weapon. To top it off, he’s a smooth and confident ball-handler. Simply put, there is not much to dislike about Griffin’s game.

Griffin’s approach to the game may be unique in this camp environment, but attacking the rim with explosive finishes is a sure fire way to get noticed. No one at this camp (and few along the camp tour for that matter) does it better than 6-foot-3 sophomore Niven Glover of Oak Ridge (Orlando, Fla.). Glover’s combination of first-step explosiveness and verticality makes defenders wince or avoid him completely despite being a tad undersized for his position. Glover is a powerful finisher to boot and hit a solid percentage on his jump shot. He does push his jumper and needs to get his legs more into the shot, but it’s not hard to like his overall offensive package.

Another sophomore wing with an outstanding first day was 6-foot-7 sophomore C.J. Walker of nearby Orlando Christian Prep. Walker is explosive around the rim and similar to Griffin, gets his game going from the defensive end. Near the end of his first game, he came up with three spectacular blocks. He’s also a long-strider in the open court and oozing with potential. It’s no wonder programs such as Louisville, Iowa State and LSU have already offered him a scholarship.

Others who turned heads with their defensive ability included 6-foot-5 2020 prospect Selton Miguel of West Oaks Academy (Orlando, Fla.), which opens at No. 18 in the preseason FAB 50 National Team Rankings, and his high school teammate Christian Lora. The latter is a 6-foot-11 space eater who knows how to use his big body to keep smaller players out of the paint. Lora is not afraid to throw his weight around, has good instinct and solid touch on his close range shots.