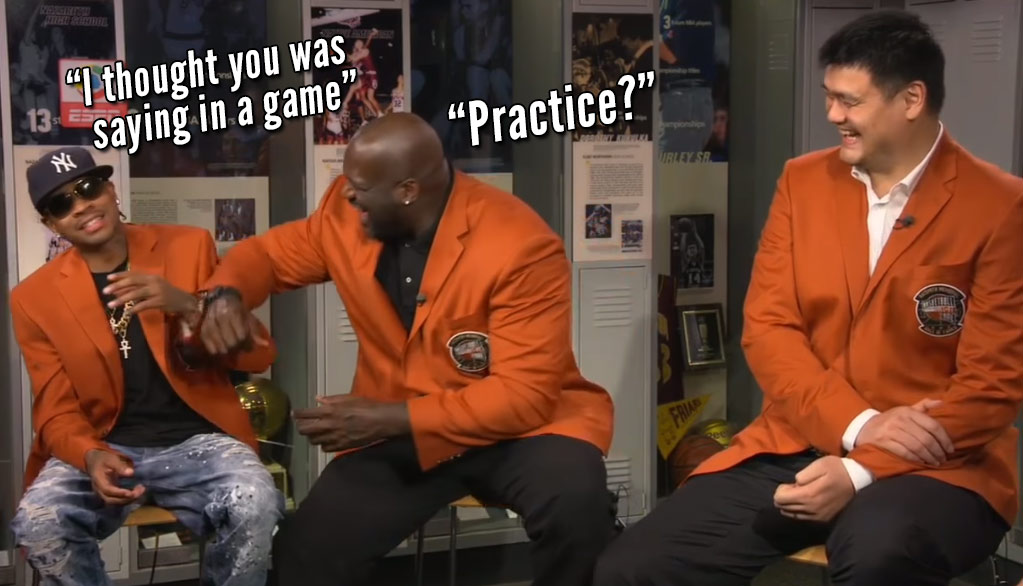 During a hilarious Hall of Fame interview on Thursday, Allen Iverson, Yao Ming and Shaquille O’Neal shared what they consider their most “Shaqtin’ a Fool” moment ...(Read more)

During a hilarious Hall of Fame interview on Thursday, Allen Iverson, Yao Ming and Shaquille O’Neal shared what they consider their most “Shaqtin’ a Fool” moment in the NBA. Actually, Shaq shared Yao’s moment for him by bringing up the time Stephon Marbury dropped him with a crossover; The 7’6 Yao agreed on the moment and i’m sure the Suns bench from 2003 would too.

Shaq said his most moment came when he tried to blame an air-ball from the free-throw line on a slippery ball. I was expecting him to say, “any moment while I was wearing a Boston Celtic jersey”  Although, he did have a couple of nice throwback dunks during his brief stint with the Celtics, so, how about Ben Wallace’s block on Shaq during the 2006 playoffs.

Unfortunately Iverson didn’t get to finish his story about Mahmoud Abdul-Rauf because Shaq (a former college teammate of Rauf) started clowning Iverson about the “practice rant.” An annoyed but amused looking Iverson responded by saying, “I thought you were saying in a game. In a game?”

I was waiting for Iverson to give Shaq this answer.

I’m not sure what moment Iverson was going to bring up about Rauf but I think this play by Rodney Stuckey has to be one of the most embarrassing moments – IN A GAME – of Iverson’s career.