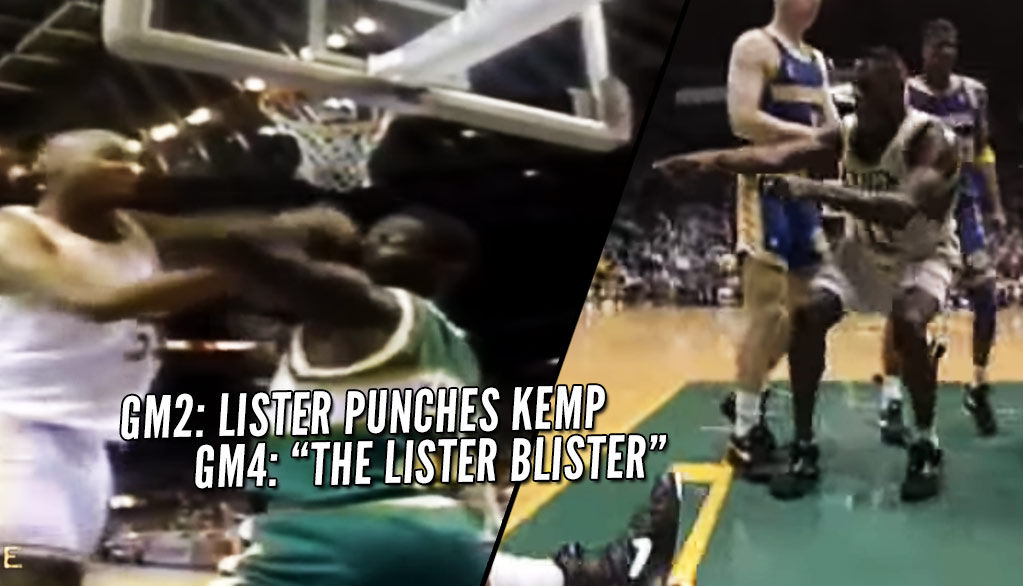 If you have ever seen any Shawn Kemp highlights, I’m assuming you have seen the infamous “Lister Blister” dunk (above). I’m also assuming you don’t know ...(Read more)

If you have ever seen any Shawn Kemp highlights, I’m assuming you have seen the infamous “Lister Blister” dunk (above). I’m also assuming you don’t know the amusing story behind it and why one of the greatest and most disrespectful NBA dunks ever is also one of the best revenge dunks ever.

Let’s go back to April 23rd of 1992, Game 1 of the first round match-up between the Golden State Warriors and Seattle SuperSonics. Kemp dominates the Warriors’ big men with 28 points on 10-of-15 shooting, 16 rebounds and 3 blocks. NBA lottery pick and starter Tyrone Hill played only 15 minutes before leaving with 0 points and Alton Lister matched Hill’s donut while racking up 3 fouls in just 7 minutes. The Sonics end up with a 117-109 win.

In Game 2, Lister got the start and did a great job at keeping The Reign Man to a drizzle, holding Kemp to 17 points on 5-of-14 shooting. He also got Kemp to lose his cool after a flagrant foul, which led to a couple of punches (13-second mark of the following video) and since this was the early 90s, they each received a tech and kept on playing. The altercation also sparked the Warriors as they dominated the 2nd half — outscoring the Sonics 61-41 — and came away with a 14-point win.

(The original video was removed. The fight occurs at the beginning of this replacement one)

With the success of Game 2, the Warriors strategy in Game 3 was to foul, foul, and make Kemp earn his points at the free throw line. They kept fouling and he would end up scoring 12 of his 22 points from the charity stripe. They also did a good job of containing the other half of the Sonics’ young duo, keeping Gary Payton to just 8 points. Unfortunately for the Warriors, they couldn’t stop the Sonics’ vets — Derrick McKey (27 points on 12 of 14), Ricky Pierce (21 points on 8 of 16), Eddie Johnson (19 points on 8 of 11) and Nate McMillan(11 points and a team-high 10 assists off the bench) — and ended up losing Game 3 by a point.

The final minute of the game also featured Kemp’s most popular alley-oop from Payton.

Here we are. Game 4 of the series. The game which featured two of the greatest dunks in NBA history and sweet revenge for Kemp.

Down by 1, midway through the 2nd quarter,  Kemp grabs 1 of his 20 rebounds, passes to Gary Payton, who passes to Nate McMillan. Nate gets double-teamed in a corner, spots a wide-open Kemp at the 3-point line, Kemp gets it back and instead of shooting a 3 like most big men today would, he takes one dribble towards the basket and then cuffs the ball like he’s about to throw down a windmill dunk. Chris Mullin briefly considered getting in the way but was wise enough to change his mind. The same can’t be said of Alton Lister, who tried to take a charge. He ended up getting dunked on, falling to the ground and being pointed at by a crouching Kemp. The dunk would go on to be known as “The Lister Blister” and the celebration just might be the most famous post-dunk celebration of all-time. If it happened today, it would be a taunting tech.

Then with a little less than a minute left before halftime, Chris Gatling swats a layup attempt by Nate McMillan, Kemp catches it, takes one step and throws down a vicious 1-hand and-1 dunk on Gatling. The dunk was so nasty, Gatling even gave him some dap. The free throw gave Kemp his 19th point of the half.  He would finish with 21 points and the Sonics took the series with a 119-116 victory.

After the series win, the Sonics had to wait on the winner of the Clippers and Jazz series. Since the Sonics beat the Jazz in 3 of their 4 regular season meetings, they were actually pulling for Stockton and The Mailman to deliver a win in their Game 4.

“Utah would be the team we want,” Nate McMillan said. “But I’m superstitious. I think it’ll be more difficult to beat them again.”

He was right. They got their date with the Jazz and the Jazz took them out in 5 games as Karl Malone outplayed the 22-year old Kemp throughout the entire series, especially in Game 4, when he had 37 points to Kemp’s 10.

Kemp did get his revenge 4 years later when they beat the Jazz in the WCF and went on to play the Chicago Bulls in the NBA Finals.