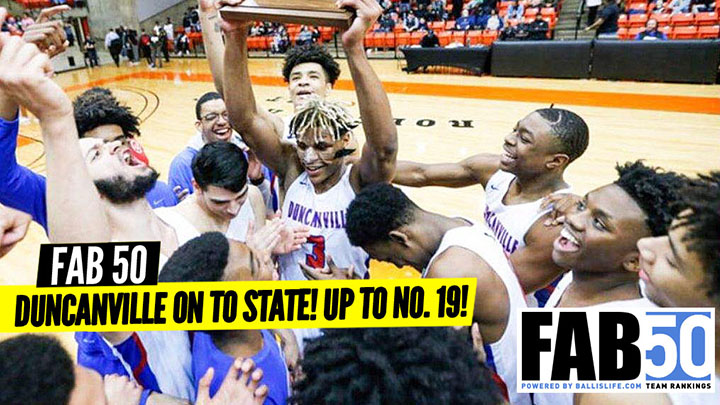 With states in the thick of their playoffs, two stunning upsets out West shake up the FAB 50. Just like there’s a fine line between winning and losing in the post-season, there is also a fine line between rewarding teams for their overall excellent seasons and rewarding those who have survived and advanced and are still playing. Making a big splash among six newcomers to this week’s FAB 50 National Rankings powered by Ballislife.com is No. 28 Mater Dei (Santa Ana, Calif.) and No. 34 Legacy Early College (Greenville, S.C.)

As rankings compilers, the goal is to put equal weight on both wins and losses for teams good enough to be ranked in the FAB 50 National Team Rankings powered by Ballislife.com. We are at the point in the season, however, in which every single game cannot be accounted for in terms of ranking a team ahead of another quality team it beat, or below one it took a loss to. The timing is of utmost importance, as the goal of quality coaches around the country is to having a team peak at the right time.

This is the week timeliness is clearly reflected, as the FAB 50 rewards teams that have put early losses behind it and rewards teams still alive in the playoffs, as opposed to rewarding teams for great overall results that happened to take a loss during “survive and advance” time.

A clear example of rewarding a team playing well is Duncanville (Duncanville, Texas). The Panthers have won 21 consecutive games and 22 of their last 23 after a slow start. Coach David Peavy’s club defeated No. 23 Guyer (Denton, Texas) in overtime, 66-62, to win the UIL Class 6A Region I final and its second OT game in three outings to advance to the UIL Class 6A state championships.

Texas Tech recruit and All-American candidate Jahmius Ramsey hit a 3-pointer with 2:38 remaining to give Duncanville a 61-58 lead. Trailing by two points (64-62) with 12 seconds remaining, Oklahoma-bound De’Vion Harmon missed both attempts, as Duncanville was denied its second consecutive trip to state in heart-breaking fashion. Ramsey finished with 26 points, while Harmon scored 22 for Duncanville, which lost early in the season to the Panthers 64-53. Duncanville fell in heart-breaking fashion, but was not penalized from a national perspective because it played a terrific schedule and defeated No. 24 Bishop Gorman (Las Vegas, Nev.) by 18 points (80-62) and that team just won its eighth consecutive NIAA title.

Two teams that lost playoffs heart-breakers and fell in the rankings were previous No. 7 Salesian (Richmond, Calif.) and No. 24 Rancho Christian (Temecula, Calif.). Salesian entered the NorCal Open regional playoffs as California’s No. 1 ranked team, but lost its regional opener for the fourth consecutive season, as it fell to unranked Modesto Christian (Modesto, Calif.) 56-55 to end its season with the one defeat. Rancho Christian, meanwhile, had to hit the road as the No. 5 seed in the SoCal Open regional playoffs and fell to previous No. 46 Westchester (Los Angeles, Calif.), 74-57.

The margin of victory and other results in California’s open regional caused Rancho Christian to fall all the way out of this week’s rankings. It’s a tough deal because the Eagles put together a terrific season, including a regular season victory over No. 7 Sierra Canyon (Chatsworth, Calif.), but as we previously mentioned with regards to timing, the Eagles have to be ranked behind Westchester, which lost three times this season to rival Fairfax (Los Angeles, Calif.). That club fell out of the FAB 50 from No. 16 after losing to Centennial (Corona, Calif.) in its regional opener and for the second time this season, as no other team defeated Fairfax.

Either Rancho Christian was going to stay in front of the Centennial club it defeated twice or fall behind the quality team it lost to more recently. In this case, there was no way to put equal weight on Rancho Christian’s and Centennial’s wins and losses. In the end, we felt Centennial had to be rewarded for its more recent win over Fairfax than Rancho Christian’s two earlier win over the Huskies. Those results opened up the door for Mater Dei (Santa Ana, Calif.) to move up to No. 28 this week as the highest-rated newcomer after it easily defeated Centennial in the regional semifinals, 67-54, its second win over the Huskies in the post-season. Mater Dei will face Sierra Canyon in Tuesday’s SoCal Open final, with Modesto Christian taking on new No. 50 Sheldon (Sacramento, Calif.) in the NorCal Open final.

Salesian was a bit more fortunate than Rancho Christian, staying in the FAB 50 at No. 31 since it only lost one game all season long and for now is still the top-ranked team in its region. The Pride simply have too many quality wins and easily defeated Sheldon during the regular season 77-59. Salesian may not stay as the top-ranked team in the region for long (just as Rancho Christian could easily move back into the FAB 50) depending on the results of the regional finals and CIF Open championship game. The CIF Open champ will definitely be California’s No. 1 ranked team, and it that’s Sheldon it will deserve to be ranked ahead of the bubble Centennial club it lost to during the regular season. If Sheldon falters in the regional final, it will likely drop back behind Centennial in the state pecking order. Should Sheldon or Modesto Christian lose a real close game versus the SoCal Open champ on Saturday at the Golden 1 Center in Sacramento, either team may deserve a higher final ranking than Salesian.

This week’s results point out the importance of playing the best ball at right time and waiting until all the games are played to place final judgement on a team’s overall resume.