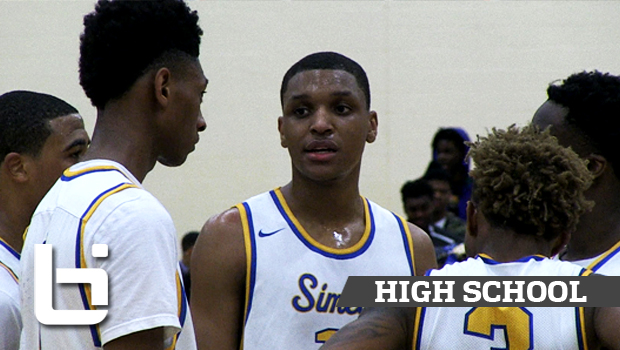 At Beasley Academic Center, the 2 won city titles. There was much anticipation when the 2 attended high school together at South Side powerhouse Simeon Career Academy. 4 years later, Simeon’s leading scorer Zack is commited to play college ball at Gonzaga. He’s considered one of the top players in Illinois’ Class of 2016. 6’7 Ben Coupet is a valued starter and quiet contributor for Simeon, but has never put up big numbers until now.
Chicago’s 2 top high school teams (and biggest rivals) met for the rubber match in the City semifinals. Soldout in advance, both teams won on the road during the season’s earlier meetings. The winner at Quest Multisport headed to the City Title game.
It wasn’t always pretty, but both teams fought til the final whistle. In the end Ben Coupet’s career night (24 points, including 4-6 from 3, 7 rebounds) led #2 Simeon (22-3) to a 74-72 win over #1 Morgan Park despite 26 points, 5 assists from Memphis bound PG Charlie Moore.
As you will see in the video, the final 20 seconds were chaotic! Up 74-72 Simeon missed a FT, layup and putback but Morgan Park couldn’t manage to score as time expired.
Zack Norvell added 16 points, 5 rebounds for Simeon and Western Michigan commit Jarrin Randall added 9 points on 3×3-pointers for Morgan Park. Simeon PG Evan Gilyard provided key energy in the second half.
Simeon went on to win the city title less than 48 hours later (first since 2012), but this matchup was a game to remember!
Simeon are #34 in the latest Ballislife Fab 50 national rankings and Morgan Park fall to #39.
Now both will compete in the Illinois state tournament.
Thanks to Jerry and everyone at Quest Multisport, CPS, Simeon, and Morgan Park for a memorable season.