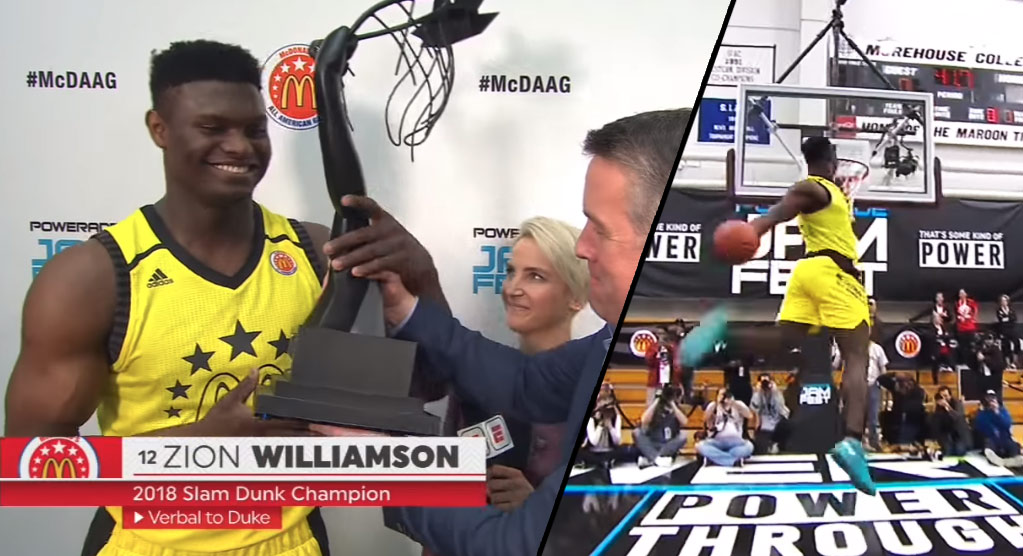 What a surprise, Zion Williamson won the McDonalds High School All-American dunk contest…even though he said he had “dead legs” after the event. What was surprising ...(Read more)

What a surprise, Zion Williamson won the McDonalds High School All-American dunk contest…even though he said he had “dead legs” after the event. What was surprising was seeing how slim he looked and hearing him say, “I’m still trying to make a name for myself” during the ESPN interview.

For the past couple of years, the high-flying-viral-video-making man-child has been one of the most exciting and popular high school players we have ever seen. Besides looking like a guarantee to win every dunk contest he will ever participate in, he’s also looked like a can’t miss prospect to make it to the NBA. The only semi-concern I’ve had about Drake’s favorite high school baller is his weight.

At a USA Basketball minicamp in October, the weight of the 6’6″ Zion was 272 pounds. 272 is about 20 pounds more than 6’8″ LeBron James, 7’0″ Joel Embiid and even 40 pounds more than 6’7″ Draymond Green. What makes Zion’s height and weight so shocking is he was just 6’3″ and 175 pounds as a high school freshman and listed at 6’6″ and 230 pounds when he became a viral sensation at age 16. If those numbers are correct, then he gained almost 100 pounds throughout his high school career and 40 pounds over the past two years!

On Monday morning, we got to film the first day of practices for the McDonalds All-American game and got a first look at the slimmer Zion. He was still far from having the body type of most 6’6″ players in the NBA but he was looking a lot more like 6’7″ former No. 1 pick Larry Johnson than 6’6 college Charles Barkley, who played between 280-300 at Alabama and slimmed down to 250 during his days with the 76ers.

I was talking to former NBA player Mo Taylor (top ranked power forward in his high school class) a few weeks ago about Zion and he said he’s not one bit worried about Zion’s high school weight because he probably eats like a normal teenager and as soon as he gets to Duke and works with their trainers and gets a nutrition plan, he’s going to shed that “baby weight” and make the transition from man-child to man among boys to THE MAN among men.