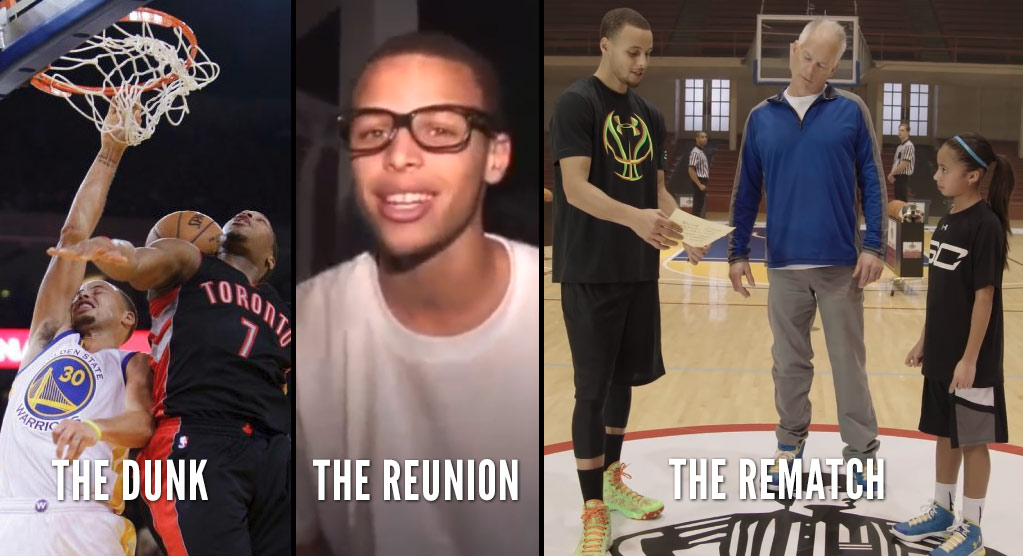 On Tuesday morning, Steph Curry released the first episode of his new video series, 5 Minutes From Home, on his YouTube channel. That same morning, I ...(Read more)

On Tuesday morning, Steph Curry released the first episode of his new video series, 5 Minutes From Home, on his YouTube channel. That same morning, I got to spend a few more minutes chatting with Steph about the series, a few of my favorite Steph videos and challenges.

Back in 2015, I told Steph I was going to challenge his wife, Ayesha, to a cook-off. As the years went by and I started seeing her face on cooking shows, book covers and the last pan that I bought at Target, I realized the chances of me beating her at a Chicken Parmesan (Steph’s favorite dish that she makes and her least favorite to make because it’s “too simple”) challenge was as good as one guy trying to beat the Warriors in the NBA Finals.

“She’s perfected everything she’s put on a plate.” Said Curry, when I asked if she’s pulled a JR Smith or George Hill on any dish.

THE REMATCH WITH THE 10-YEAR-OLD

The other thing we talked about back in 2015 was him losing to then 10-year-old Jaden Newman in a shootout after beating Big Shot Bob Horry, NBA 3-Point Champion Tim Legler, and his Dad, Dell Curry.

“We need a rematch. We have to make it happen.” Curry said while praising Newman, who knocked down 17 threes on her way to 70 points earlier this year. “She was good at 10 and she’s much tougher now because of her confidence.”

He then brought up a Ballislife video we posted this past weekend of Newman causally knocking down a shot from Curry range.

check out @jadennewman1 with the half-court shot! showing them boys at @neoyouthelite how to do it! 🔥

Like Newman, Steph also had the opportunity to compete against an NBA All-Star at the age of 10.

Back around 2000, Steph and brother Seth used to go to the Toronto Raptors practices with their Dad. During those practices and pre-game shootarounds, they would often play in pick-up games or go 1-on-1 with the pro players, including Vince Carter during the height of Vinsanity.

After reminiscing about how fun it was to watch young Vince Carter, I asked if he was afraid of Charles Oakley back then.

“I wouldn’t say I was afraid but he made his presence felt when he came into the room.” Said Curry about the man who fought Charles Barkley three times and even fought the real-life X-Man, Xavier McDaniel.

Curry also talked about Oakley having dinner with the Warriors after they swept the Cavs in the Finals and how Oak and Draymond Green joyfully spent the whole night talking trash to each other.

Our conversation about the greatest dunker of all-time led me to ask Steph if he’s ever caught an alley-oop or dunked on anyone…at any level.

“I caught an alley-oop in college. It shocked everybody.” Curry said.

I couldn’t find any video evidence of this shocking event but I did find an NBA lockout video of Steph unofficially becoming the only person to ever miss three dunks on a single alley-oop attempt (Robert Horry missed two in a similar fashion during his rookie year).

As for “dunking on” someone.

“It depends what you consider dunking on,” Curry replied. “I had two that some would call a dunk by. But I’m claiming both of them.”

One of those two dunks ended with him doing a Vince Carter-like chin-up with a confused Gerald Wallace underneath. The other was a breakaway dunk that had Kyle Lowry thinking he was going to pull a LeBron from behind. Curry dunked it and then celebrated with a Shawn Kemp-like yell.

I brought up a dunk his Dad did back in 1996 that was very similar. Dell was wide-open for a simple one-hand dunk and Don Reid came from behind and tried to get the chase-down block. When Dell realized he just “dunked on” someone, he turned around and started mean-mugging. Like father, like son!

Dell and Steph might not be the most impressive skywalkers but they are two of the best shooters of all-time. With Dell as a Dad, it’s no surprise Steph became a great shooter (arguably the greatest) but I was always surprised at how differently they shot the ball.

“I used to have a catapult shot,” Curry said. “I would launch it from my waist but changed it in high school so I wouldn’t get blocked.”

Listening to him casually explain how he changed a few things in his shot to become a “good shooter” is like listening to Warren Buffet explain how he made $84 billion by making a few little investments here and there.

I brought up a scene from the HBO NBA Finals show with Warriors assistant coach Bruce “Q” Fraser (the guy you see throwing the ball to Curry before games) raving about how Curry doesn’t miss shots in practice. Curry confirmed the story and said he would shoot 100 threes in practice (20 from 5 different spots) and once made 94 out of 100, including 77 straight!

My response was, “What the F*** is going through your head when you are shooting lights out like that?”

I asked my two YouTube experts/daughters (age 10 and 13) what they wanted to see on Curry’s YouTube channel. The 13-year-old said, “Klay Thompson.” I asked again and she again replied, “Klay Thompson!” She then talked about how cute Riley Curry is and said: “Riley challenge or reaction videos would be cool.”

Steph said Riley — who became a viral sensation during the 2015 NBA playoffs and has more YouTube views than Klay Thompson — has a database of hilarious videos she’s made on his IPad but he doesn’t want her getting too much online exposure. As a parent, I think that’s a very good idea.

My 10-year-old enjoyed the videos Steph and Ayesha used to make on Music.ly and DubSmash.

She also wants more singing and guests like Rudy Mancusco.

Turning me into the best

(now I can’t get that damn song out of my head!)

Lucky for her, Mancuso is the special guest on the first episode of Five Minutes From Home and Curry hinted there might even be a surprise on iTunes coming.

As for my request, I said I wanted a “Davidson Show” reunion.

“That’s brilliant,” Curry responded. “I might have to give you a shout out or a producer credit.”

You have probably seen the “I Love Commons” video with a clean-shaven Steph rapping and trying not to make “awkward eye contact” with a girl in the school cafeteria. That’s just one of the many amusing skits made by Steph and his college friends that he still keeps in touch with. Some of his favorite skits were spoofs on Room Raiders, MTV Cribs and a video about two guys with the same name.

As I impatiently wait for the reunion special (with my producer credit?!), here are a few more amusing videos with Steph and his family.

RILEY IS WATCHING YOU