Stephen Curry took a lot of shots on Saturday against the Nets: 31 to be exact and missed 18 of them.  But being the highlight and story generator that he is, he also gave us plenty to talk about as he outscored Jarrett Jack 34 – 28, passed his father on the career 3-point list and had the bench going crazy in OT….with a DUNK!

Every kid will remember the first day they beat their Dad one-on-one,  in a game of H.O.R.S.E, and especially when they were able to say they were better. In Steph Curry’s case, he had to wait a little longer than most since his Dad was a former NBA player. Steph eventually had all of those moments and on Saturday, Steph can add the memory of passing his Dad’s three-point total of 1,245 shots from downtown.  It took Dell 1,083 games in 15 years to rack up that many 3-pointers; it took Steph only 427 games to beat it. It also puts Steph in 40th place on the NBA’s all-time 3-point list.

“I knew about it going into the game,” Stephen Curry said. “It’s a pretty special moment for my family. I’m sure he never dreamt of the day one of his sons would pass him.”

It was also in the 2nd half when Curry did most of his damage by scoring 21 of his 34 points. And it was in OT when he made a shot that had the bench going crazy. But unlike most games when that shot would be a crazy move followed by an unwise looking 3, this shot was a baseline “baby dunk” by the Baby Faced Assassin. 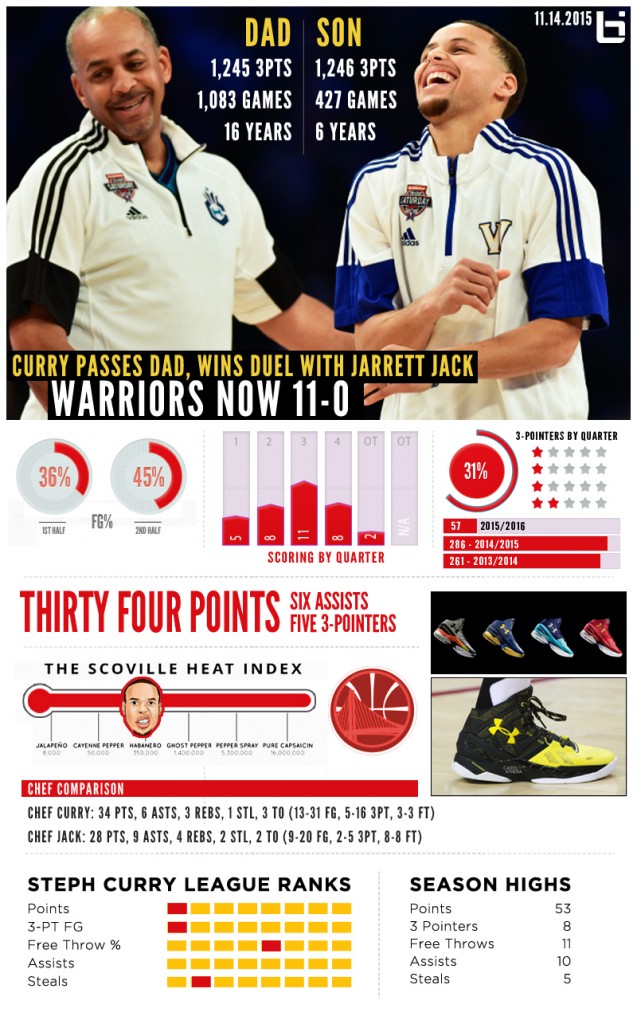