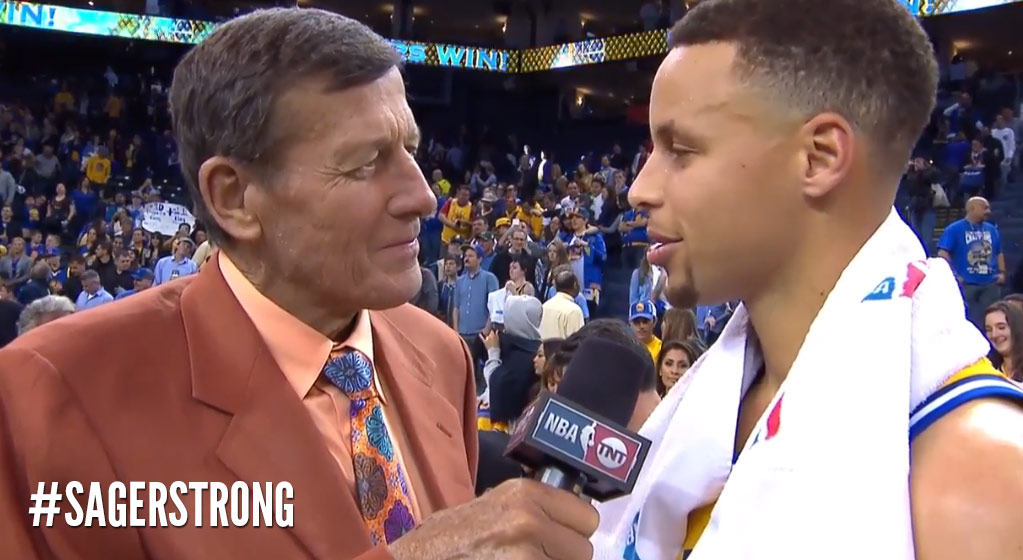 After the Warriors win over the Wizards, Craig Sager – wearing a Golden State Bridge orange sport coat and shoes with the words “Mr Fancy” ...(Read more)

After the Warriors win over the Wizards, Craig Sager – wearing a Golden State Bridge orange sport coat and shoes with the words “Mr Fancy” on them – asked Steph Curry if he needed some rest. Curry responded by saying, “Seeing you and what you are doing. I mean, we have no excuses.”

Curry then let Sager, who continues to work despite his leukemia no longer being in remission and now having a blood cot behind his right ear, how he has inspired the Warriors.

“You’re an inspiration for us to keep doing what we’re doing, keep fighting and that’s the mentality we have and it’s kind of contagious. So thank you”

Without  skipping a beat, Sager moved on to another question.

The 64 year old Sager also recently clarified reports about his 3-6 months to live story after his feature on HBO’s Real Sports aired.

“I’m grateful to HBO for telling my story and I’d like to thank everyone for their ongoing support. I have acute myeloid leukemia, an aggressive type of cancer. The typical prognosis is 3-6 months to live, but I would like to stress that is for a patient who is not receiving treatment. Fortunately, I am receiving the best treatment in the world and I remain fully confident I will win this battle.

“I think my demise has been prematurely reported. ” Said Sager to Janie McCauley. “I think I’m going to kick this and make medical history and I really believe that.”