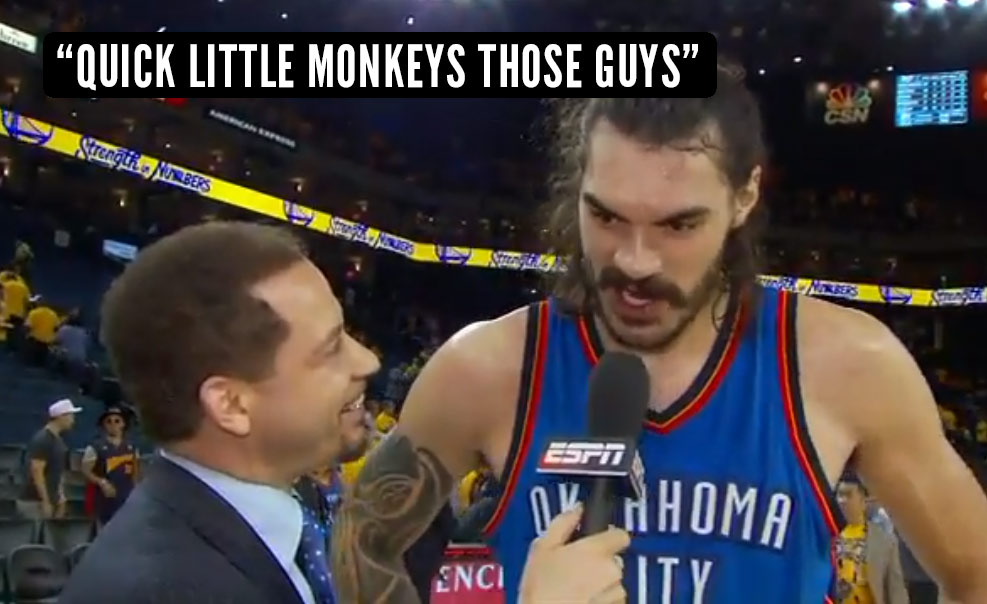 Immediately following the Thunder’s Game 1 victory over the Golden State Warriors on Monday, ESPN’s Chris Broussard asked Steven Adams how much of a challenge it ...(Read more)

Immediately following the Thunder’s Game 1 victory over the Golden State Warriors on Monday, ESPN’s Chris Broussard asked Steven Adams how much of a challenge it was chasing the Warriors around. Adams responded by calling the team “quick little monkeys,” which was met with a laugh from Broussard and to no surprise, a bunch of over reactions on social media.

Realizing the comment was causing some controversy, the 22 year old New Zealander, who came to America 4 years ago, apologized and explained to the USA Today how the expression isn’t offensive in his country.

“It’s just different, mate,” he told the paper. “Different words, different expressions, and stuff like that. But they obviously can be taken differently, depending on which country you’re in. I’m assimilating, mate, still trying to figure out the boundaries. But I definitely overstepped them tonight.”

The only offensive thing I saw or heard from Steven Adams on Monday was 10 of his 16 points in the 2nd half and a pair of clutch free throws to go with 12 boards and 2 blocks.