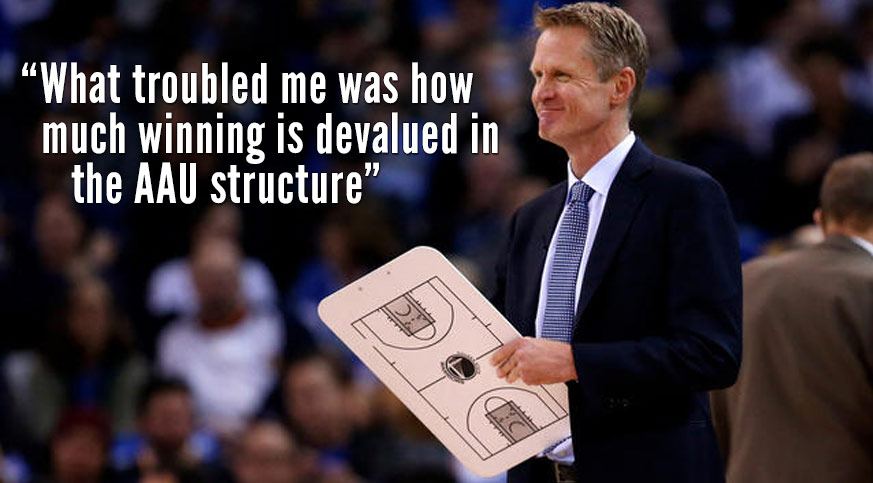 An image of Coach of the Year Steve Kerr with the following quote about AAU basketball, from a 2012 Grantland article, has been making its rounds on social media over the past few days.

“Even if today’s players are incredibly gifted, they grow up in a basketball environment that can only be called counterproductive. AAU basketball has replaced high school ball as the dominant form of development in the teen years. I coached my son’s AAU team for three years; it’s a genuinely weird subculture. Like everywhere else, you have good coaches and bad coaches, or strong programs and weak ones, but what troubled me was how much winning is devalued in the AAU structure. Teams play game after game after game, sometimes winning or losing four times in one day. Very rarely do teams ever hold a practice. Some programs fly in top players from out of state for a single weekend to join their team. Certain players play for one team in the morning and another one in the afternoon. If mom and dad aren’t happy with their son’s playing time, they switch club teams and stick him on a different one the following week. The process of growing as a team basketball player — learning how to become part of a whole, how to fit into something bigger than oneself — becomes completely lost within the AAU fabric.”

Maurice Taylor, a former NBA player and current coach of the Houston AAU team Mo Taylor Elite, had this to say about the quote.

Everything he said is true… These teams don’t value PRACTICE and TEAM play. Boys have to know how to play in a system and they can’t be given false hope of being the best thing since sliced bread! Can’t just roll the ball out there and tell them to “just ball out!” As I heard a coach tell his team… Smh. Some of these coaches don’t give their boys the ammunition needed to compete in structured systems. That’s why so many don’t succeed on the college level or become what I like to call a “bad pro”. I believe that your practices should be much harder than your games… Practice builds character.

Teddy Dupay – one of the greatest high school shooters of all-time – also posted the image on Facebook with the following caption and comments.

For you parents drinking the koolaid- AAU Basketball is NOT
A. Helping your kid develop
B. Getting your kid “Exposure”
C. Going to help you receive a scholarship
D. Elite Competition

I’ve never started on argument on this page and never will. There were not 400 coaches at the last event. If you are talking about the event in Atlanta, it was 1 of several THOUSAND events across the country that the tourney directors (who are making all the $$$$) all claim to have that many coaches at their events. There were teams in 10 age groups and no college coach would ever go watch any kid not in the 11th/12th grade that is not already though the NCAA Clearing House. They don’t go to “see” players. When they do go, it’s to “be seen” by players they already want to make them feel desired. It’s called recruiting. 99% of the AAU “coaches” I know couldn’t spell Clearing House and even fewer of them have the foggiest idea of what it takes to be a college athlete. Stop believing the hype and BS these guys are feeding you because it sounds so juicy, you then relay it to parents and players who trust and value your opinion. 1 thing and 1 thing only will get you a scholarship. BE GOOD ENOUGH!!!

15 years ago AAU was different. Now its glorified and much more expensive YMCA ball. When the usual score is 80-15 with a running clock, nobody is watching

A lot of NBA players do support the AAU system and sponsor teams but there’s also a lot of players that absolutely hate AAU basketball and have been pretty vocal about it, like Robert Horry and his former teammate Kobe Bryant.