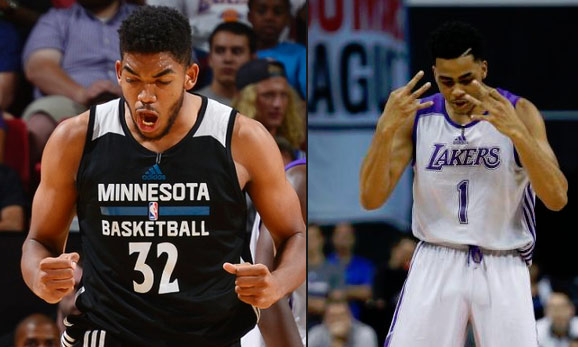 The #1 and 2 picks in the 2015 NBA draft, Karl-Anthony Towns and D’Angelo Russell, have the potential to be stars in the league but during ...(Read more)

The #1 and 2 picks in the 2015 NBA draft, Karl-Anthony Towns and D’Angelo Russell, have the potential to be stars in the league but during their summer league debuts on Friday, they looked exactly like what they are: rookies playing their first minutes for a NBA team.

Towns had 12 points on 4 of 10 shooting and Russell had 8 points on 3 of 8 and they only had that many points because you can’t foul out of a summer league game.  The two combined for 16 fouls in a combined 58 minutes.  As bad as that sounds, the Lakers Tarik Black had 10 fouls in 27 minutes.

But don’t jump to way too early conclusions about Towns and Russell.  Towns had a team-high 4 assists as Zach LaVine went off for 24 points in the win and Russell had 6 assists and should have ended with 10 if his teammates would have hit a few more of their shots.

“Everybody was trying to do more than what their job was,” Russell said.

Don’t worry, first days at a job are rarely ever that great.