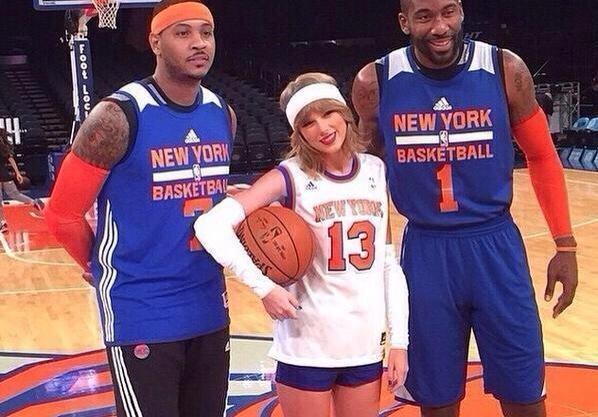 Taylor Swift at Knicks’ practice with Carmelo Anthony and Amar’e

Don’t lie and act like you don’t enjoy some of Taylor Swift’s music – even Kendrick Lamar is a fan. I already have a leaked copy of her new album 1989 and listened to it by myself before my daughters so obviously I’m atleast a mini-fan. Same could be said about me and the Knicks. I loved the Pat Riley Knicks and shed a tear watching Michael Rappaport’s documentary “When the Garden was Eden” this weekend but I can’t say I buy tix everytime the Knicks come into town.

It looks like Taylor Swift might be a mini-fan too. Actually I have no idea if she is or isn’t a fan but I’m just going off this photo of her at Sunday’s Knicks practice with Melo and Amar’e Stoudemire while wearing a #13 Knicks jersey which Mark Jackson used to wear.

Based off of this old video, i’m not sure she has that great of handles either but it might just be the shoes.

For those New Yorkers who don’t want to see anything Taylor Swift related, you better hope she doesn’t release the song off her album called “Welcome to New York.”