According to the late Charlie Murphy, the late great Prince wasn’t just a musical genius, he was a genius on the hardwood too. That story was hilariously told in the classic Dave Chappelle sketch that ended with “The Artist” saying, “Game, Blouses” after a dunk and then serving Murphy’s crew some blueberry pancakes.

The story was confirmed by Samuel L. Jackson, who said he asked Prince if that game in 1985 really happened. Prince told him, “Yes, in church shoes.”

“Everything in that skit is true,” said Free. “I played in that game. And Prince was Steph Curry all motherfucking night!

“We had on ‘blouses,’ and frilly shirts,” Free said. “The same clothes we had at the club. Prince played in 6-inch heels!”

“They checked the ball to me, I gave it to Prince and he went to work,” Free said. “You know that one move where Curry dribbles up and they got him covered, but he steps back behind the 3-point line and hits nothing but net? That was Prince.”

Another great basketball story about Prince came from Toure, author of the book I Would Die 4 U: Why Prince Became An Icon. Here’s what he had to say about playing against who I consider the greatest guitarist of all-time.

Via WNYC:
“He picked up my ball and made a face that was understood in international shit-talking parlance to mean I’ma kick yo’ ass, and started knifing around the court, moving quick, dribbling fast, sliding under my arm to snatch rebounds I thought for sure I had. He was showing off, being competitive, and, yes, engaging me in the same way I’d interacted with so many men I had played basketball with before. He moved like a player and played like one of those darting little guys you have to keep your eye on every second. Blink and he’s somewhere you wouldn’t expect. Lose control of your dribble for a heartbeat and he’s relieved you of the ball. He jitterbugged around the court like a sleek little lightning bug, so fast he’d leave a defender stranded and looking stupid if he weren’t careful. With his energy and discipline it was a rapid game, but never manic, or out of control. Still, we were both rusty so most shots missed, clunking off the side of the rim or the backboard. After a while, there was not much of a score. I scored on a drive that felt too easy and as the ball dropped in I looked back at him. He said, ‘I don’t foul guests.’ Okay. On the next play I drove again and the joker bumped my arm really tough, fouling me. Funny dude.”

As great as the Chappelle Show sketch is, my favorite video of Prince is him spinning a ball on his finger and taking jump shots during a live concert on his 1988 LoveSexy Tour.

If you want to read more about Prince’s basketball skills, I highly recommend you read this piece from The Undefeated, which includes Prince’s high school coach breaking down his game and comparing him to 5’7″ former NBA player Spud Webb. 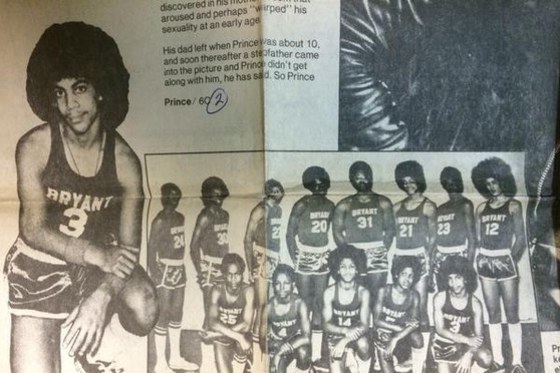 #WhatsForLunch: Prince used image of Chappelle dressed as him on the cover of his 2013 single, "Breakfast Can Wait." pic.twitter.com/Uhh7o16xcP