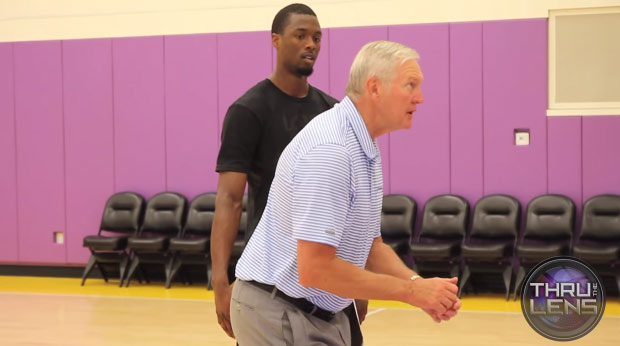 When somebody says “basketball genius” the first person that pops in my head is the NBA logo himself: Jerry West.  The man who averaged 46.3 points ...(Read more)

The Golden Footage: Jerry West Giving Tips to Harrison Barnes During a Workout

When somebody says “basketball genius” the first person that pops in my head is the NBA logo himself: Jerry West.  The man who averaged 46.3 points per game in a NBA Finals series and won Finals MVP even though his team lost.  The man who lead the league in scoring (31.2 ppg) 1 season and then led the league in assists (9.7 apg) 2 seasons later. The unstoppable scorer who was just as great on the defensive end (4 x All-Defense 1st team). The 2 x NBA executive of the year who knew Kobe Bryant was going to be a star when the Charlotte Hornets told him they had no need for the teenager.  The  NBA champion who threatened to quit the Warriors organization last summer if the team traded future NBA champions Klay Thompson and David Lee for Kevin Love.

I could go on forever praising the man who Michael Jordan grew up praising but the bottom line is the guy is a genius and when a genius speaks you listen.

During a 2014 summer workout shoot by my favorite sports photographer Cassy Athena with the Warriors’ Harrison Barnes, West came into the gym and shared some wisdom with the young NBA champion.

Check out a 75 year old Jerry West making one shot after another at a camp and then telling the campers “I haven’t shot a basketball in years.”