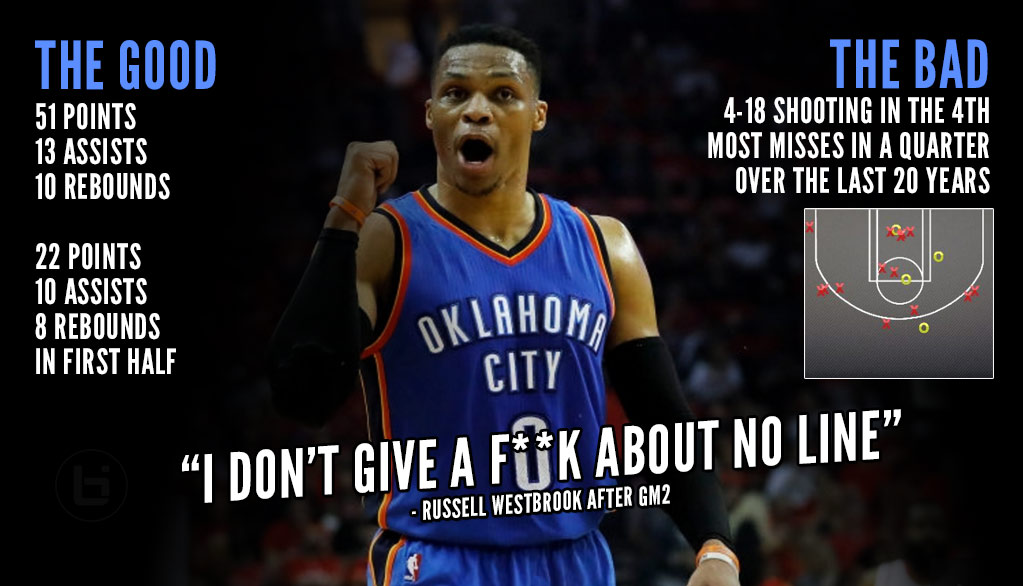 When people look back at records and stats, most will only find and/or remember is Russell Westbrook had the first (and maybe only) 50-point triple-double in ...(Read more)

The Good, The Bad & Ugly About Russell Westbrook’s 50-Point Triple-Double In GM2

When people look back at records and stats, most will only find and/or remember is Russell Westbrook had the first (and maybe only) 50-point triple-double in NBA Playoff history during the (MVP?) season he averaged a triple-double; the 51 point, 10 rebound, 13 assists performance destroyed the previous point record held by Charles Barkley (43 in 93) and Oscar Robertson (43 in 63).

But, there will be the James Harden fans, the Rockets fans, the “I didn’t vote for Westbrook fans, and just analytics fans who will point out how ugly Westbrook’s (sushi chef outfit and) Game 2 line was. A line Westbrook said he “don’t give a fuck about” since they lost. A line that includes a horrific 4 for 18 4th quarter, which was the most misses in a playoff quarter over the past two decades.