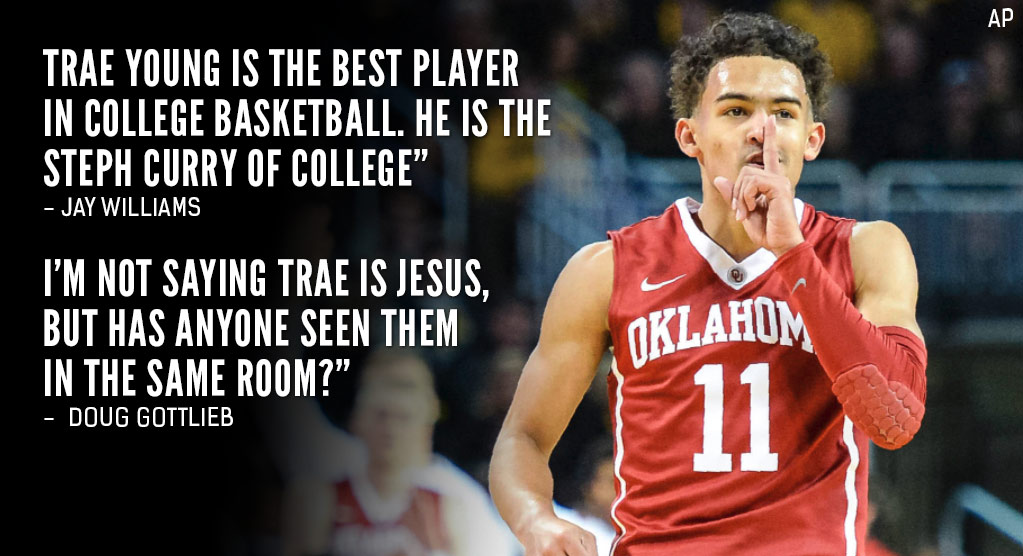 After watching freshman phenom Trae Young put up 21 points, 7 assists and 4 rebounds…in the FIRST HALF vs No. 3 Wichita State, D’Angelo Russell tweeted he got game. Jay Williams took it a step further by tweeting, “Real talk: Trae Young is the best player in college basketball. He is the Steph Curry of college.” Fox Show host Doug Gottlieb took the comparisons even further by tweeting, “I’m not saying Trae Young is Jesus, but has anyone seen them in the same room?”

About 15,000 people were at Intrust Bank Arena to watch the former Ballislife All-American and OU upset Wichita State and I couldn’t find one tweet about any Jesus sightings in the arena. So, maybe?

Young finished the game with 29 points and 10 assists, pushing his averages to 28.8 points (#1 in the nation) and 8.8 assists (#3). And according to ESPN, he’s on pace for the most points per game in Big 12 history. They also pulled out this crazy trivia: Young is the first player with 25 points and 10 assists against an AP top-3 team since Jonny “drafted before Steph Curry” Flynn in 2009. Flynn also needed 6 overtimes to put up those numbers; Young flirted with those numbers in one half.

After the game, Young, who tweets “another day, another opportunity” every morning, dedicated the win to his Grandfather with this tweet: “This one was for you Grandpa #RIP #BackToTheLab.”