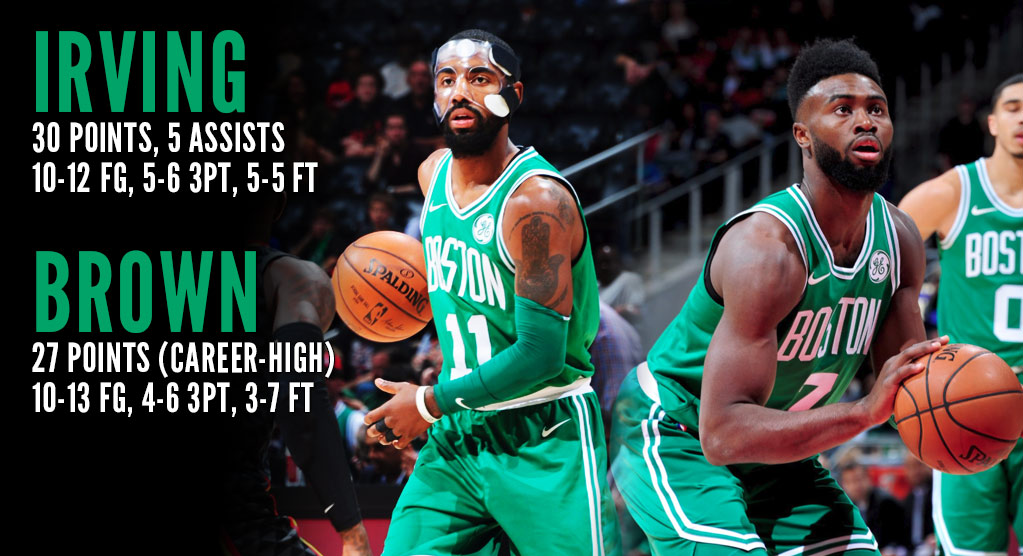 Jaylen Brown followed up his emotional performance against the Warriors with a career-high 27 points as the Boston Celtics beat the Hawks for their 15th win ...(Read more)

Jaylen Brown followed up his emotional performance against the Warriors with a career-high 27 points as the Boston Celtics beat the Hawks for their 15th win a row, matching their longest win-streak in franchise history through 17 games. Brown connected on 10-of-13 shots, while Kyrie Irving knocked down 10-of-12 for a game-high 30 points.

“Most of us have never been on a winning streak like this,” Said Irving, who looked more comfortable with his mask and made a season-high five threes. “I don’t know if we even know how to pay attention to all the hoopla that goes on in terms of the excitement of it. I just think that every single game we take it as a challenge.”

Here’s a look at the top winning streaks in Celtics history.

Coming off their first title in 22 years, the Celtics forged the best start in club history at 27-2. Kevin Garnett’s season-ending knee injury thwarted any hopes of a repeat.

Julius Erving and the 76ers ended this streak as well as the Celtics’ back-to-back championship hopes a few months later in the Eastern Conference finals.

With Bill Russell and Tommy Heinsohn leading an offense that had seven double-digit scorers, the Celtics went on to win the second of eight consecutive titles.

The Celtics opened the season 11-0 and didn’t look back, setting an NBA regular-season record with 62 victories before beating the Lakers in The Finals.

At 15-2, Boston matched the best start in franchise history through 17 games. The Celtics will go for No. 16 on Monday night when they visit the Mavs.

And here’s a look at the upcoming teams the Celtics will have to beat to set a new record: Mavs, Heat, Magic, Pacers, Pistons.