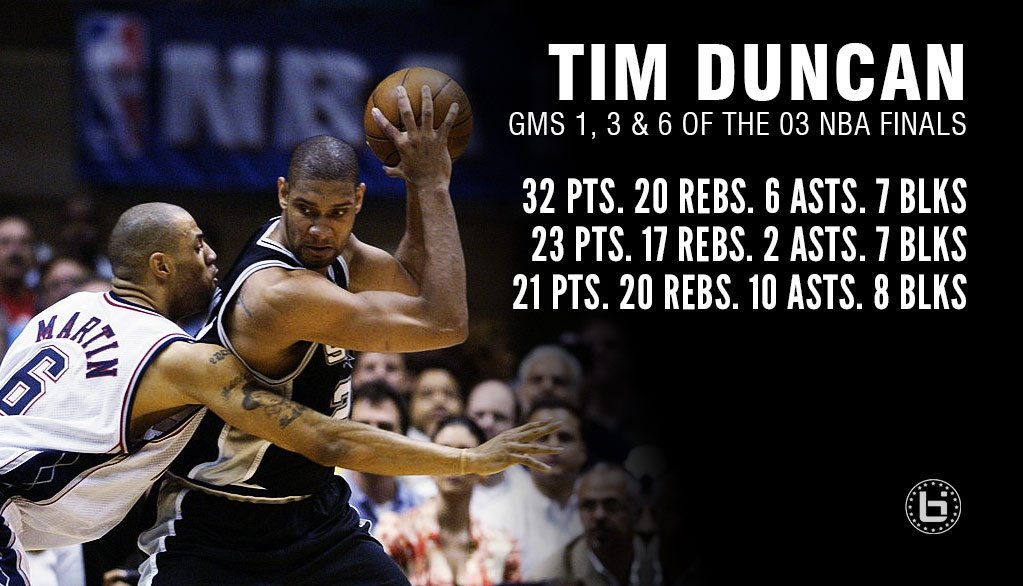 For 11 years, the NBA and NBC enjoyed high Nielsen ratings that made advertisers happy. Then in 2012, NBC had their lowest Finals ratings ever as ...(Read more)

Remember When Tim Duncan Dominated the 2003 Finals & Was “Robbed” Of A Quadruple-Double?

For 11 years, the NBA and NBC enjoyed high Nielsen ratings that made advertisers happy. Then in 2012, NBC had their lowest Finals ratings ever as Shaq and the Lakers steamrolled and swept the New Jersey Nets.

The following year, ABC took over and in their first NBA Finals, they had Nielsen ratings barely above half of what NBC did in the previous few years. The numbers were so bad, the other major networks were getting higher ratings while showing reruns.

Before you blame the John Tesh-less ABC openings, remember NBC’s run ended with a Lakers 3-Peat and ABC, unfortunately, had to start their run with a San Antonio Spurs vs New Jersey Nets series. A series which lasted six games with only one team ever breaking the 100 point mark. A series which saw both teams score a combined 153 points in Game 4, with neither team breaking the 80-point mark.

To put the interest and ratings into perspective, Game 2 had a Nielsen rating of 5.2; Game 7 between the Lakers and Kings in the previous year had a rating of 14.2.

But what most people missed out on during this series were a few monster fantasy games from Tim Duncan. In Game 1, the GOAT power forward had 32 points (13 in the 4th), 20 rebounds, 7 blocks, 6 assists and 3 steals while shooting 65%. He followed that game up with four impressive double-doubles and then finished off the Nets in Game 6 with a near quadruple-double: 21 points, 20 rebounds, 10 assists and 8 blocks.

According to some, Duncan was robbed of two blocks that would have given him the only quadruple-double in NBA Finals history. In case you were wondering about triple-doubles, there’s been 38 in NBA Finals history and this is Duncan’s only one. LeBron holds the Finals record with 10 and Magic Johnson is second with 8.

Back to the ratings, only a third of the number of people who watched Michael Jordan win his last championship watched this game, but I’m sure the minority who did, will tell you how impressive Duncan was….and how boring the 88-77 victory was.