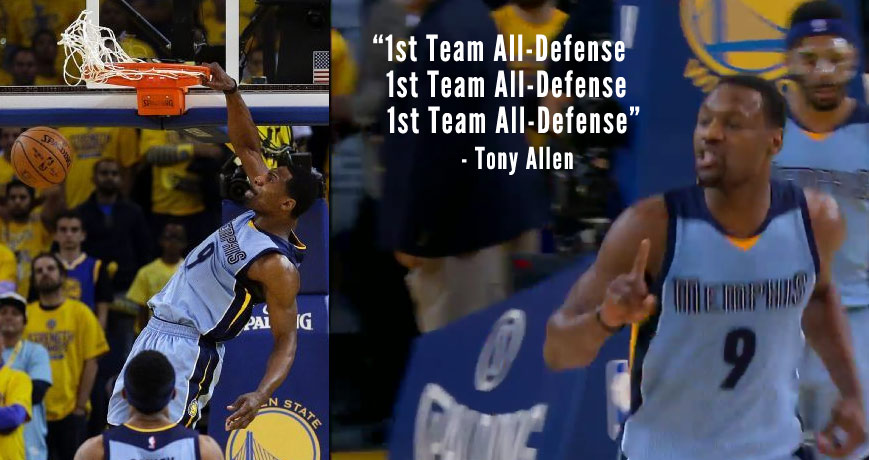 In case you didn’t know Tony Allen was 1st Team All-Defense, he gave plenty of reminders during last night’s GM2 win over the Warriors. He did ...(Read more)

In case you didn’t know Tony Allen was 1st Team All-Defense, he gave plenty of reminders during last night’s GM2 win over the Warriors. He did it with steals, he did it with suffocating 1-on-1 defense on Klay Thompson and he did it by constantly yelling it throughout the game to the crowd who already had beef with him for walking through a MC Hammer routine by a bunch of kids dancing in game 1.

His shut-down defense was so effective on Klay Thompson that he made the Golden State All-Star shut up and not talk to the media after a 6 of 15 shooting night (1 of 6 from downtown).

Allen’s most memorable moment came midway through the 4th when he intercepted a pass to Klay for one of his 4 steals and threw down a dunk to push the Grizzlies lead to double figures. As he ran back down the court he held up his index finger and continued to taunt fans with chants of  “1st Team All-Defense! 1st Team All-Defense!”

Before GM2, Allen talked about Steph Curry winning MVP, which he thought was “well-deserved,” but also said the MVP isn’t anything he hasn’t already seen in his 11 year career.

“He can shoot the ball pretty good and he got a nice handle, But it ain’t nothing I ain’t never seen before.”

It might sound like trash talking to some but it’s true. The NBA champion and 1st Team All-Defense (just in case you didn’t know) player has played alongside Ray Allen, Paul Pierce and guarded everyone from a prime Kobe to every elite point guard in the league right now, so what do you expect Allen to say.

Earlier in the season I talked to Allen about the toughest players in the league to guard and although he wouldn’t give much praise to any current player (doesn’t want to give them confidence) or say he has a “difficult time” guarding them, he did discuss how hard it was guarding the underrated and retired Michael Redd – a lights out shooter who owns the record for most 3-pointers in a quarter (8!).  Too bad the Rockets didn’t have a 1st Team All-Defensive player on their roster that night to try to guard Redd. A 1st Team All-Defensive player like this guy!

Tony was even able to make Klay Thompson miss wide-open dunks while on the floor.