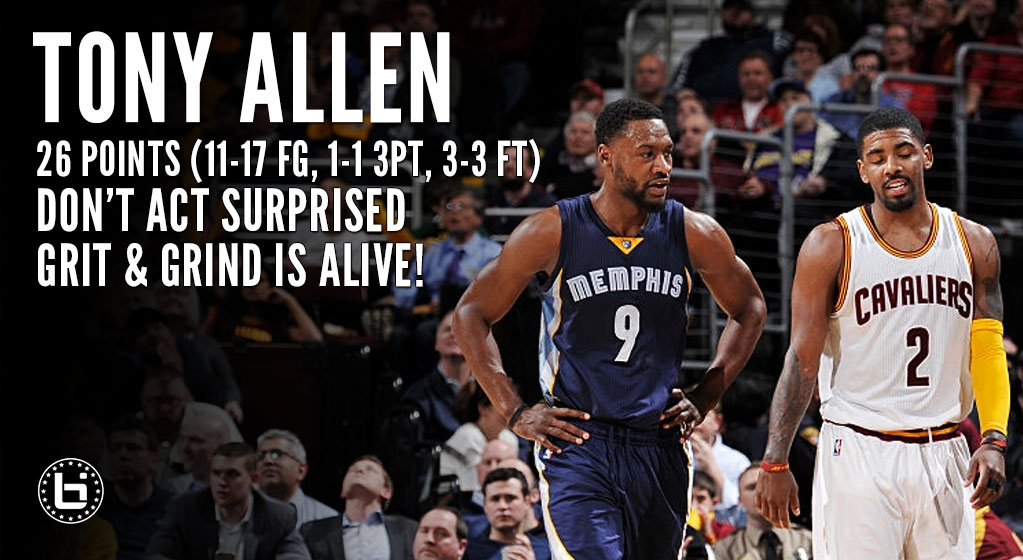 On Monday night, Tony Allen, coming back after missing 8 games with an injured knee, scored a season-high 26 points as the Grizzlies – missing 4 ...(Read more)

Tony Allen Turns Back The Hands Of Time, Scores 26 In Win Vs The Cavs

On Monday night, Tony Allen, coming back after missing 8 games with an injured knee, scored a season-high 26 points as the Grizzlies – missing 4 of their starters – went to Cleveland and came away with a 3 point victory. The victory was shocking but I can’t say I’m as shocked as most when it came to “The Grindfather” putting up 26 points.

I agree, Tony Allen is most known for his defense and was recently given some big recognition by Kobe Bryant, who called Allen “the best defender he ever faced.” What many people don’t know or remember is Allen was a scorer coming into the league; He was a high-flying guard many thought was going to become a 20-point scorer.

So why didn’t it happen?

In 2004, he was drafted to a Celtics team with Paul “All-Star” Pierce, Ricky “never met a shot he didn’t like” Davis and Gary “still trying to prove something” Payton. Then during the 2006/07 season, Allen finally got the minutes and green light and he responded with 6 consecutive games of 20+ points. He would have had 7 but his game and season was cut short by a Torn ACL.

By the time Allen was back to health, the new-look roster included Rajon Rondo, Ray Allen and KG. With that much firepower, the only way he could earn any minutes was by becoming a defensive stopper.

In 2010, Allen took his overshadowed talents to Memphis and it’s with the Grizzlies where he became “The Grindfather.”

In particular, it was a game that season against Kevin Durant (Allen would later become known as the “Durant-stopper after the 2014 playoffs) and the Thunder when Allen put up 27 points, 5 steals and 3 blocks and then said it was ‘grit and grind” after the game.

Since that game, Tony has made the All-Defensive 1st team 3 times, the 2nd team once and never averaged more than 10 points a game.

But on Monday night, he showed that he can still score buckets like he did with the Celtics, like he did at OSU, like he did during his high school days in Chicago and most importantly, grit and grind is still alive!