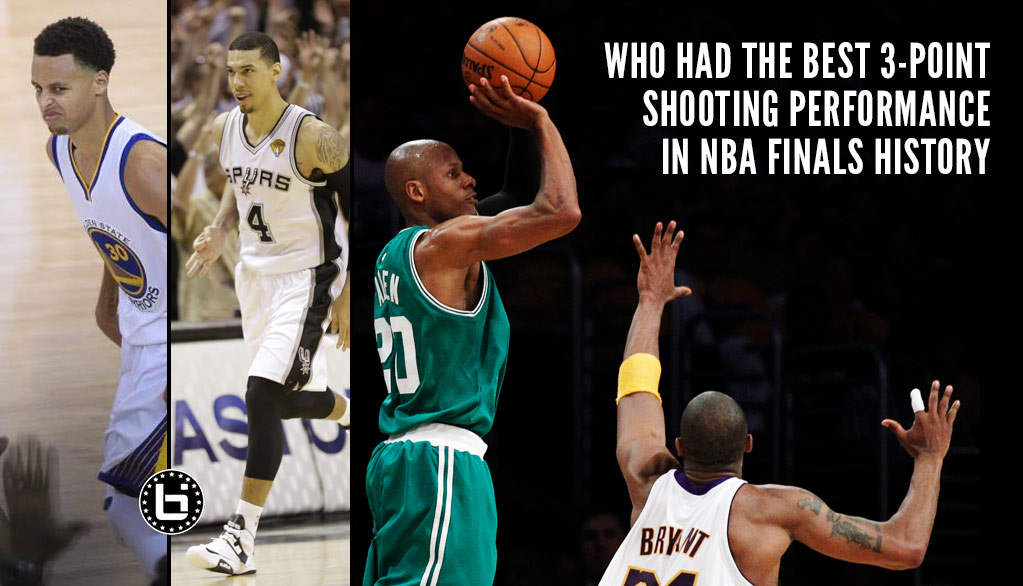 In Game 5, Kyrie Irving responded by catching fire and putting on what LeBron James considers “one of the greatest performances he’s ever seen live.” Irving finished with 41 points on 17 of 24 shooting, while going 5 of 7 from 3.

The two standout performances had a lot of people debating if they were seeing one of the best NBA Finals shooting exhibitions ever while salivating at what Curry and Irving will do in Game 6. While we countdown the hours until tip-off, let’s look back at the top  5 best 3-point shooting performances in Finals history before this season, starting with who else…

Everyone from Steve Nash to Common to Dwyane Wade’s lovely wife to Dale Earnhardt Jr were raving on Twitter about the amazing shooting exhibition Steph Curry put on during GM5 of the 2015 NBA Finals.  Curry finished the game with 37 points and tied a NBA record for most points in the 4th with 17. In that quarter he was 5-7 from the field, 3 of 5 from 3 and 4 of 4 from the line. His 7 3-pointers also puts him just 4 shy from from tying the next guy on the list for most 3-point field goals in a NBA Finals series.

“Luckily, it seems everything is going right for me,” said Green after breaking Ray Allen’s NBA Finals record for 3s made in series. “I’m feeling truly blessed right now. There’s got to be a Higher Power. I owe it all to God. The basketball gods are in our favor right now.”

Unfortunately for him and the Spurs, the Basketball Gods were just playing with them as LeBron, Ray Allen and the Miami Heat ended up winning the Championship. The record Danny Green broke in 2013 belonged to Ray Allen in 2008.  But it was in 2010 that Allen had his most impressive shooting exhibition in the Finals.

Going against the actor Spike Lee originally wanted for ‘He Got Game,’ Jesus Shuttlesworth went off in GM2 and made his first 7 3-point attempts. The 7 3s in the first half was a NBA record and so was the 8 made for the game. Allen finished the night with 32 points – 27 in the first half.

“It’s definitely right up there,” Allen said when asked about his performance. “There’s no better place, no better moment or time to play a game, to win a game, and to win it in great fashion.”

Coach Rivers had the best quote about Ray’s night.

“I have not seen him much warmer.”

Pippen? Yep, Pippen only made 12 3-pointers during the 1997 NBA Finals against the Utah Jazz and 7 of them came during Game 3.  The performance is a bit of lost one because the Bulls lost the game and MJ only had 26 points on 9 of 22 shooting.  But Pippen was on fire, hitting 7 of 11 from 3. The craziest stat of the game is Pippen never made a 2 point field goal in the game and was 0-2 from within the 3-point line.

The 7 3-pointers tied a NBA Finals record  set by….

When people think about game 1 of the Rockets and Magic in 95, they will probably remember Nick Anderson missing 4 consecutive free throws at the end of regulation. Others might remember Shaq and Hakeem going at it and Hakeem making a game-winning tip in OT.  What many don’t remember is how great Kenny Smith was.

With the Rockets losing by 20 points in the first half, the Jet scored 15 points in the 3rd quarter by making a NBA record 5 3-pointers in the quarter. Then at the end of regulation, after the missed free throws by Anderson, he pump faked Penny and hit his 7th 3-pointer to put the game into OT – the 7 3s were also a NBA record for a Finals game.

“It’s amazing. (Anderson’s) got the heart of a lion. He’s not going to miss four in a row often. But we just don’t die. We just step up.” said Smith.

The Shrug Game. This is the most known performance on this list because it’s also considered one of the greatest NBA Finals performances ever.

Jordan – not known as much of a 3-point threat in 92 – made 6 3-pointers in the first half of Game 1 against the Portland Trailblazers.  That doesn’t sound that impressive now, right? How about finishing the game with 39 points (35 in the first half) and 11 assists with only 1 turnover in just 34 minutes and getting a 33 point win?

All you can do is just shrug at those stats….or make a stank face. 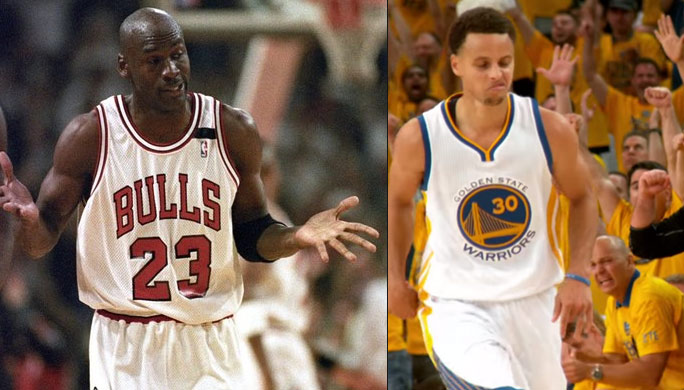