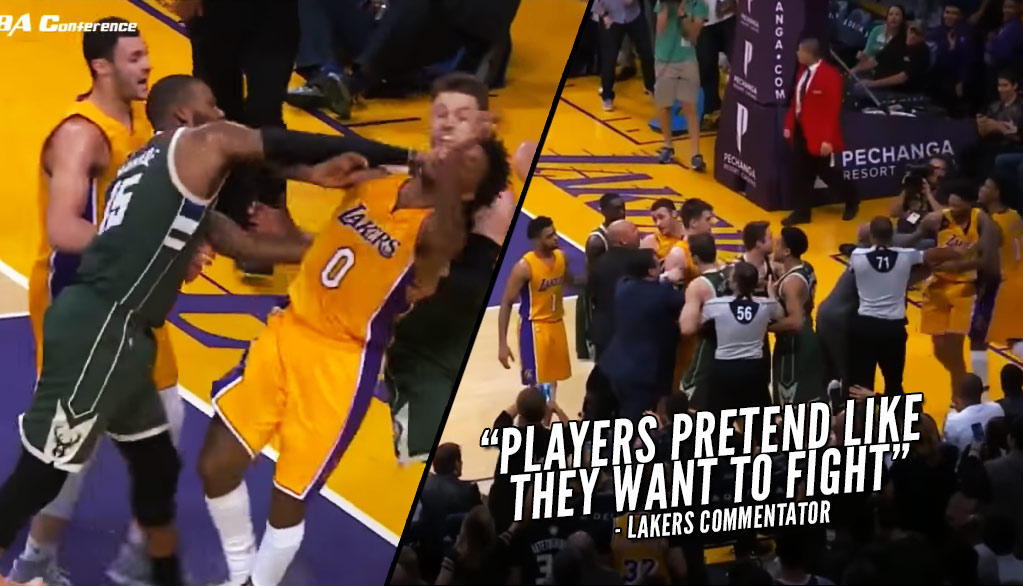 Not many people witnessed the Lakers and Bucks scuffle on Friday night. It was a late game, it wasn’t on many TV channels and most hoop ...(Read more)

Not many people witnessed the Lakers and Bucks scuffle on Friday night. It was a late game, it wasn’t on many TV channels and most hoop fans were busy watching NCAA games featuring a bunch of players older than the half of the Lakers and Bucks. What everybody missed was a pretty amusing scuffle at the end of the third quarter.

It all started when Malcolm Brogdon committed a hard (but not flagrant?) foul on Nick Young. Young didn’t appreciate the foul so he pushed Brogdon, which led to Greg Monroe pushing him. This is where the first funny moment happens.

1: D’Angelo Russell pushing Monroe in the back and then backing off while all the other players got into each other’s faces. And for that push, the refs actually ejected Russell! The explanation was he was “escalating the altercation.”  Before the BS ejection, Russell was having a nice bounce-back game (14 points on 5 for 9 shooting) after having the worst game of his career (5 points on 2 for 10 shooting with 7 turnovers and 6 fouls).

2: One of those players who got right in Monroe’s face after the shove by Russell was Brandon Ingram. The 190 lb forward got five-fingers from Monroe then passed around by Teletovic, the ref and a Bucks’ security guard? Lakers coach Luke Walton didn’t appreciate the Bucks’ staff member getting physical with Ingram.

“If there’s nothing wrong with that, then I have no problem finding some people to hire on our staff next time we get in a skirmish,” Walton said after the game. “The refs don’t say anything about that, and he puts his hands on one of our players. He works for them. He can touch their players all he wants. Don’t touch my damn players. Because if that’s OK, I’m sure we can find a couple of people here in LA that want that job working for the Lakers, too. That’s not right.”

3: Luke also had a funny comment about Monroe during his pissed off post-game interview, saying, “I don’t know if he was mad that Zubac was kicking his butt all night long.” Walton then brought up how silly it was that Russell was ejected for his push while Monroe was grabbing his players by the neck and slapping others.

“That’s crap to me.” Added Walton.

4: If you go to the 2:07 mark of the video you can see a kid sitting courtside getting so excited about the scuffle he tried to stand up before the adult next to him put his arm up to let him know he needs to sit his a$$ down. I can only assume that Metta World Peace was acting like the kid in #4 and having flashbacks of the Malice in the Palace.

Honorable mention goes to the guy sitting on the other side of the adult, holding his leg in the air during the scuffle. 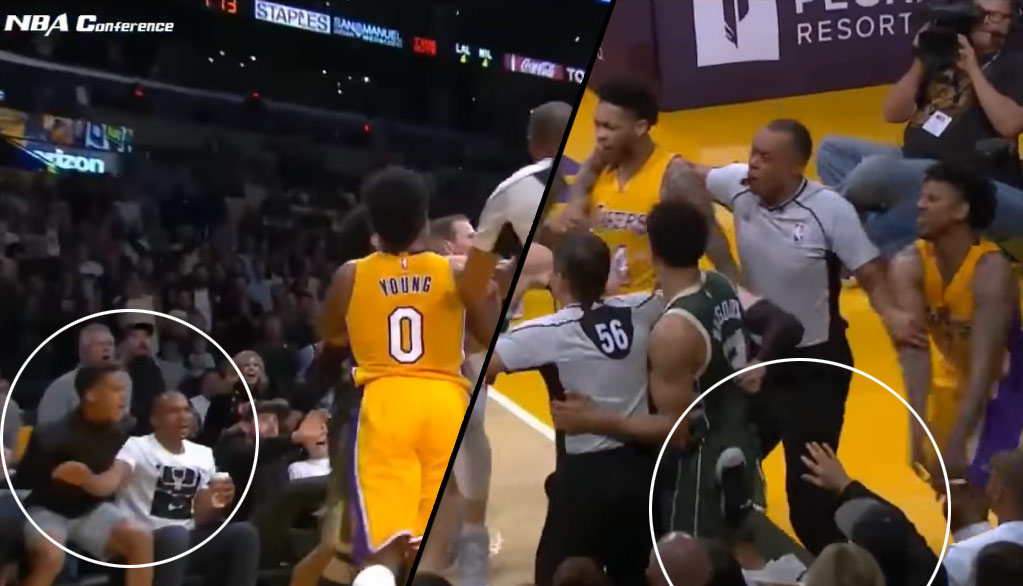 #5:  My favorite funny moment during this scuffle was the Lakers commentator at the 1:19 mark saying, “the players pretend like they want to fight.”

When the dust was cleared, Young and Monroe were also ejected with Russell and despite a 4th quarter run by the Lakers, they came up four points short of a victory.

Here’s what they had to say after the loss.