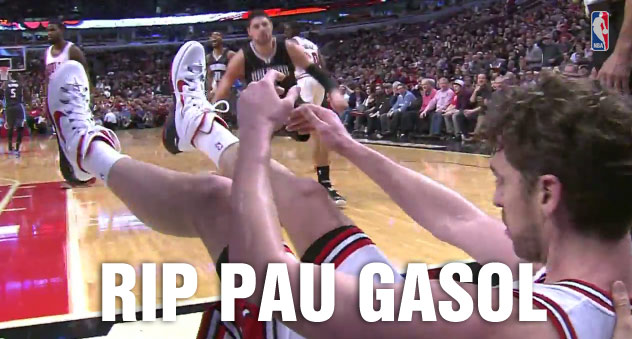 Less than 48 hours after scoring a career-high 46 points, Pau Gasol was “murdered” in a game by Orlando’s Nikola Vuceivic.  The crime happened at the end ...(Read more)

Less than 48 hours after scoring a career-high 46 points, Pau Gasol was “murdered” in a game by Orlando’s Nikola Vuceivic.  The crime happened at the end of the 3rd quarter with the Magic up by 15. Vucevic drove down the middle and threw down a skyhook looking left hand dunk that caused Gasol to hit the ground and slide into the cameramen.

The murderer, who deserves some All-Star consideration, finished the game with 33 points and 11 rebounds and the victim scored a team-high 28 and 14 in a losing effort.

But don’t worry Bulls and Gasol fans, Pau has 9 lives and has been “killed” a few times in the past but he keeps on coming back.

This was just last month.

Last year, Josh McRobert had a nice dunk over Gasol.

2011…not murdered but violated by DeAndre Jordan.

And back in 2007, this dunk looked like it almost killed both Gasol and Baron Davis

UPDATE FROM THE FUTURE