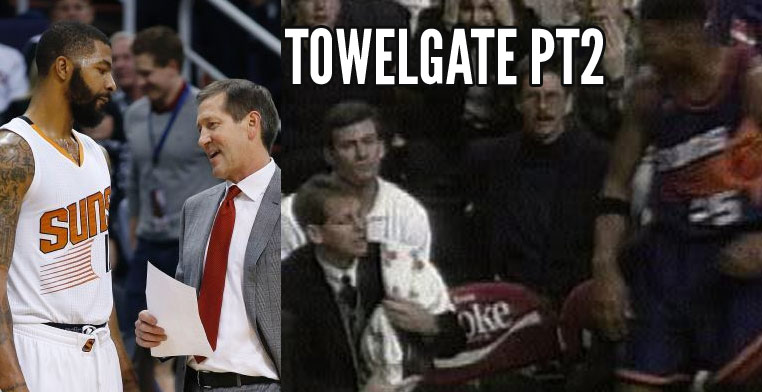 Ask most fans of the Rockets, Lakers or Spurs what’s the first thing that comes to mind when you say Robert Horry and they will probably think of some clutch shot by Big Shot Bob.  Ask a Phoenix Suns fan about Horry and they will probably bring up his “cheap shot” on Steve Nash or the time he threw a towel in the face of Coach Danny Ainge during his very short stint with the Suns. Horry was punished with a 2 game suspension and 5 days later was rewarded with a trade to the Lakers where he would add rings 3, 4 and 5 to his collection.

On Wednesday night, it was de ja vu for Phoenix Suns fans as pissed off power forward Markieff Morris reportedly threw a towel at coach Jeff Hornacek due to a 4th quarter benching.

Via The Arizona Republic

With 9:47 to play and Denver leading 84-75, Morris was taken out of the game and he threw the towel while barking at Hornacek. Hornacek picked up the towel and threw it back Morris’ way with his own upset words for him.

“That’s between me and ‘H’ (Hornaceck),” said Markieff, who made 2 of 8 shots and had one rebound Wednesday. “It’s not for media. It’s something between me and him that happened. We’ll talk about it.”

Morris has been rumored to be on the trading block so it will be interesting to see if the sequel to Towelgate also ends up with a trade.  Ironically, the team that is mentioned the most as a destination for Morris is Houston – the place where Horry got rings 1 and 2 to his collection.