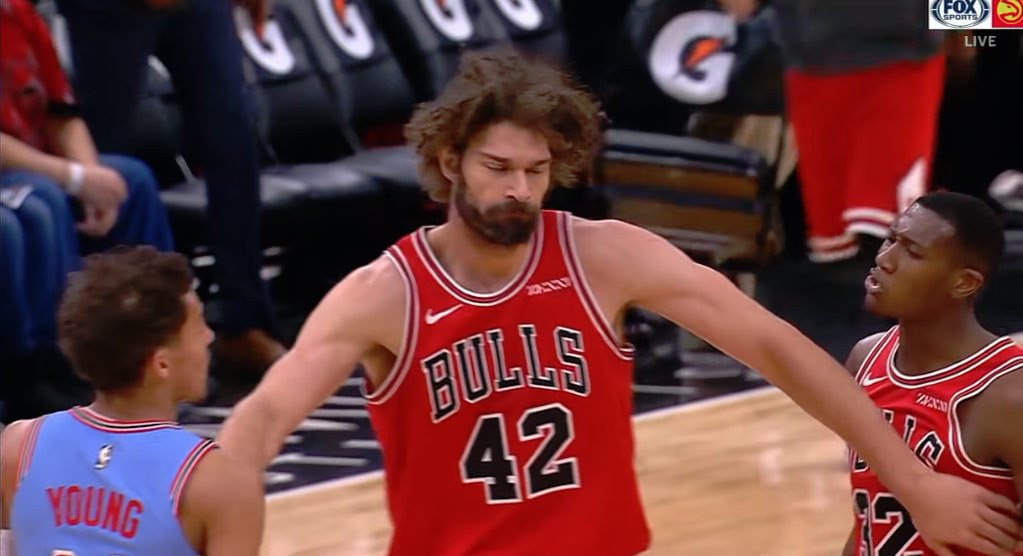 Eastern Conference Rookie Of The Month Trae Young’s impressive week started off with a career-high 36 points against the league’s scoring leader and his Houston Rockets. ...(Read more)

Eastern Conference Rookie Of The Month Trae Young’s impressive week started off with a career-high 36 points against the league’s scoring leader and his Houston Rockets. As an encore, he tied his career-high and dished out 10 assists in a win against the Minnesota Timberwolves. Two night later, he put up a ridiculous 49 points, 16 assists and 8 boards during a 161-168 loss to the Chicago Bulls in quadruple overtime!

On Sunday, Young had a shot at revenge against the Bulls. After 18 minutes, he was on pace for another 30-point double-double with 18 points (6 of 9 shooting) and 5 assists. Then the refs decided everyone was having too much fun and hit Young with a technical for staring at the back of Kris Dunn’s head after making a three. The tech was Young’s second, which meant his first career ejection in the NBA.

“You play with energy, passion, emotion. For me, I was just having fun. That wasn’t the first time I looked at someone after I hit a shot. But he made the call.”

As expected, the reactions on social media weren’t kind to the enforcers of the soft league that has people like me and Reggie Miller shaking our heads and reminiscing about his trash-talking days in the NBA.

“What’s happened to my beloved NBA game?” Tweeted Miller. “So damn SOFT and SENSITIVE now, nooooo way Trae Young should be given a technical for this. I would have been broke and out of the league in 2 years. Let Ballers Ball.”

Nick Young, who has been calling Trae Young the Rookie Of The Year throughout the week, also tweeted about the ejection.

That’s weak as hell. Give @TheTraeYoung his money back https://t.co/QJnxcwjPbg

Anyways, let’s revisit the highlights from Young’s other games this week, including his historic 49, which made him the first rookie since The BIG O in 1961 with 40 points and 15 assists in a game. The performance was also Trae’s 4th game with 30 points and 10 assists; Only rookies with more are Oscar (24), Michael Jordan (5) and Steph Curry (5).