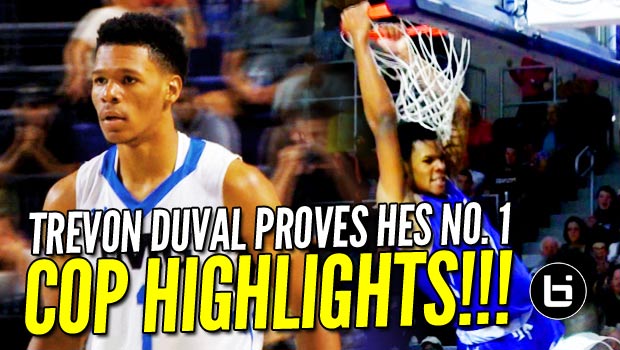 Trevon Duval made his City of Palms debut this year and he sought out to prove he was the no. 1 point guard in the country. ...(Read more)

Trevon Duval Proves He’s the No. 1 Point Guard in 2017! City of Palms Highlights!

Trevon Duval made his City of Palms debut this year and he sought out to prove he was the no.
Click here to Read More

1 point guard in the country. Duval led IMG Academy to a 3rd place finish as they defeated St. Patrick School from New Jersey featuring Kentucky commit, Nick Richards. Through 3 games, Duval was able to showcase his ability to finish in, around, and through traffic, and his vision to find teammates in the open-court. Dvual is still listing a Top 5 of Arizona, Seton Hall, Kansas, Baylor, and Duke. The Blue Devils were 3-deep at City of Palms headlined by lengendary Coach K. Check all his highlights from 3 games at the City of Palms Classic!

FOLLOW US FOR MORE HIGHLIGHTS OF THE TOP RECRUITS!