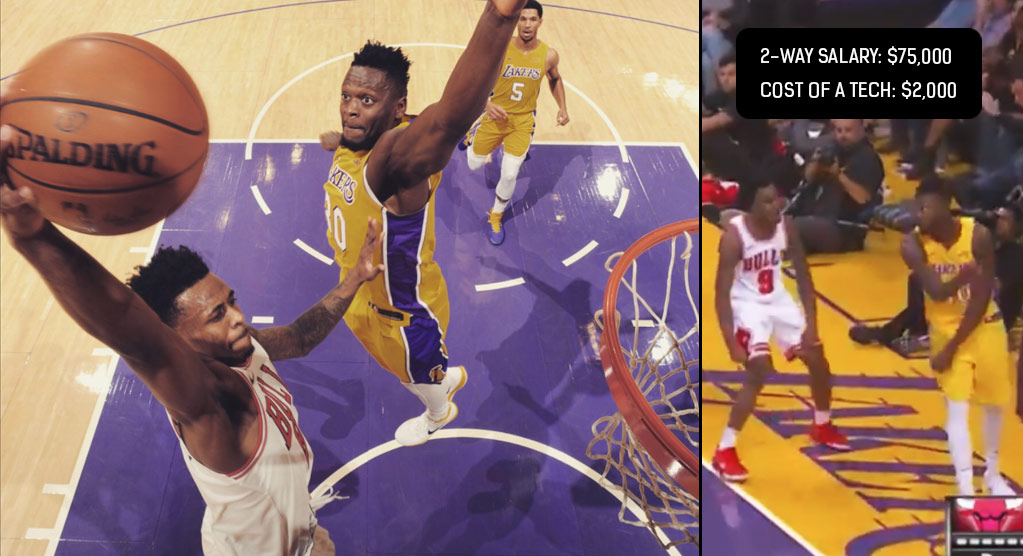 Undrafted Antonio Blakeney Scores 15 In 8 Minutes, Gets Tech After Dunking On Julius Randle

Add Antonio Blakeney to the list of rookies who played better than #2 pick Lonzo Ball during Tuesday’s Bulls and Lakers game. The undrafted rookie came off the bench and scored 15 first half points in just 8 minutes of action. Two of those 15 came off a dunk on (star of the game) Julius Randle. And those two points are going to cost Antonio two thousand dollars because he picked up a (weak) taunting tech after the dunk.

Usually, the fines of techs aren’t a big deal for NBA players because they are getting paid millions each season. Considering Antonio, who scored 44 points in a G-League game a week ago, is just getting $75,000 this season (plus the NBA minimum salary for rookies on a per day basis), $2,000 will be felt in Antonio pockets just like his dunk was felt by Randle’s ego.

Unfortunately for Antonio and the Bulls, they didn’t have much to cheer about in the second half, which saw the Bulls blow a 19-point lead and lose 103-94.

Lakers Rookie Kyle Kuzma had a game-high 22 points and Lonzo Ball overcame a horrible shooting night — 3-of-13 shooting and missing 7 of his first 8 shots — to make a couple big plays in the 4th. The Bulls other rookie, Lauri “The Finnisher” Markkanen (coming off a career-high 26), also struggled with his shot (4-of-17 shooting) and finished with a double-double of 13 and 14.