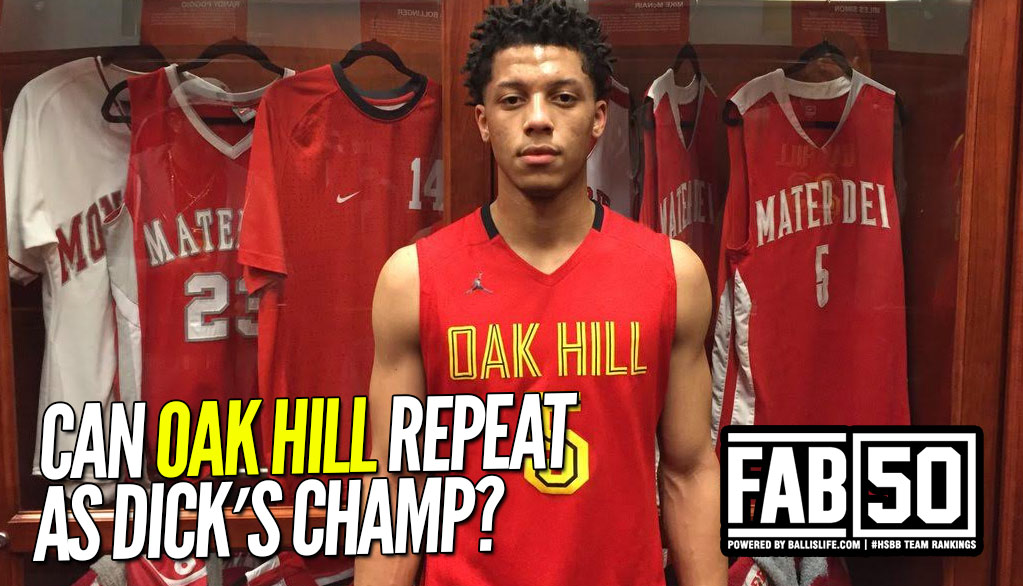 The Dick’s Nationals field is set and we break down how it could affect the final 2016-17 edition of the FAB 50 National Team Rankings powered ...(Read more)

The Dick’s Nationals field is set and we break down how it could affect the final 2016-17 edition of the FAB 50 National Team Rankings powered by Ballislife.com in two weeks. In addition to state champions from Arizona and North Carolina and the six independents in the event, teams from Pennsylvania, Minnesota, New Jersey, California, Ohio, Michigan, and the basketball-crazed states of New York and Indiana are still going in their quest for state titles.

There are five new teams in the latest FAB 50 National Team Rankings powered by Ballislife.com, but the big news from the past week is how this year’s Dick’s Sporting Good National High School Tournament (March 30-April 1, Christ the King of Middle Village, N.Y.) will affect the final rankings set for April 3.

It’s a strong field, but obviously there is a shadow looming with FAB 50 No. 1 Nathan Hale (Seattle) opting not to play in the event despite clearance from the WIAA. Let’s quickly break down the field and the FAB 50 scenarios depending on which team wins three games to take the tournament title.

*If La Lumiere wins, it would be nearly impossible to dislodge Hale from the top spot. La Lumiere lost to No. 38 Sierra Canyon (Chatsworth, Calif.), a team Hale defeated by two points when it was a consensus top five-ranked team.

*If IMG Academy wins, it would have a strong case for No. 1. The Ascenders defeated 10 teams who are currently or were previously FAB 50 ranked, including two wins over No. 10 Patrick School (Elizabeth, N.J.). It will also have avenged its only loss (of sorts) to Montverde Academy, since the Eagles are on IMG’s side of the bracket.

*If Montverde Academy wins, it would be similar to IMG Academy in that it already has defeated ten currently or formerly ranked FAB 50 teams, including a head-to-head over IMG Academy. Montverde, however, has lost two of three games to No. 2 Memphis East and also lost to No. 4 Imhotep Charter. The latter will have the stronger case provided it wins a state title because Memphis East has also lost to the Sierra Canyon team Hale defeated.

*If Oak Hill Academy wins, Hale is even more of a slam dunk No. 1 team. Hale defeated the Warriors head-to-head at the Hoophall Classic.

*If Shadow Mountain wins, it will have a strong case for No. 1 as an unbeaten state champ that just won a tournament field with seven FAB 50 ranked teams.

*If Greensboro Day wins, Memphis East would be happy because unranked Hamilton Heights Christian Academy (Chattanooga, Tenn.) not only beat the nation’s No. 3 ranked team, it also defeated coach Freddy Johnson’s club and that loss wouldn’t look bad at all. The Bengals’ entire resume would have to be compared to Hale’s.

*If Wasatch Academy wins, the rankings would be shaken up because that team is currently unranked. Wasatch would in essense avenge losses to Findlay Prep and IMG Academy, but it also lost to No. 19 Chino Hills and unranked Windward (Los Angeles) during the regular season.

Speaking of Patrick School, it takes on the highest-ranked newcomer in the FAB 50, No. 29 Don Bosco Prep (Ramsey, N.J.), on Monday night in the New Jersey Tournament of Champions title game. The Ironmen defeated No. 41 Linden (Linden, N.J.) in the TOC semifinals, 65-58, behind 23 points and 14 rebounds from Grid-Hoop stud Marcellus Earlington.

The Patrick School has lost to IMG Academy twice, to Memphis East and split games with Linden, while one-loss Don Bosco Prep has beaten Bergen Catholic (Oradell, N.J.) two out of three times.