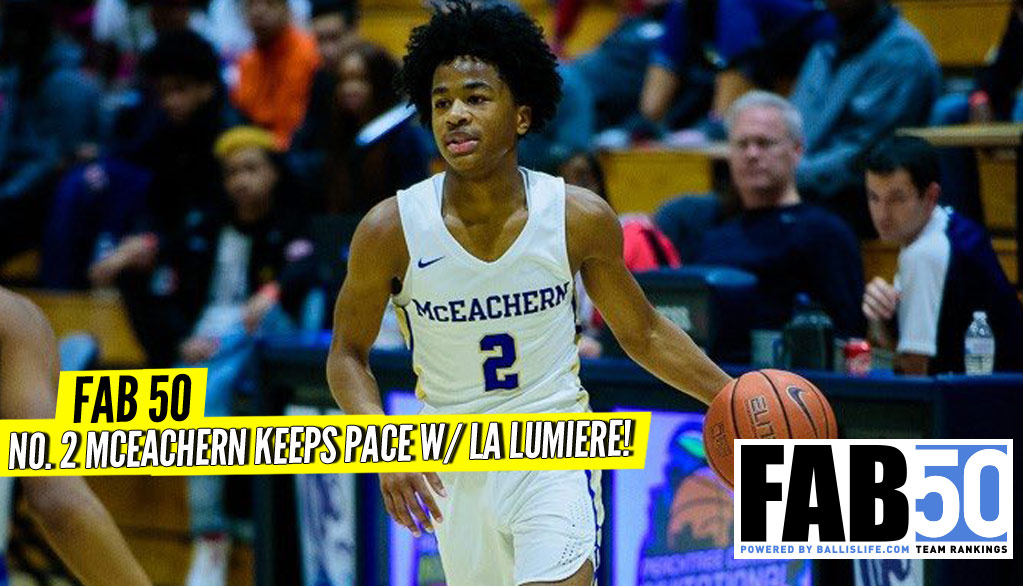 La Lumiere of Indiana beat Montverde Academy of Florida for the second time this season to keep its firm grip on the top spot in the FAB 50, while No. 2 McEachern of Georgia gutted out a rematch victory over tough Imhotep Charter of Philadelphia. Will La Lumiere and McEachern eventually settle matters on the hardwood?

La Lumiere of Indiana, the top-ranked team in the FAB 50 National Team Rankings powered by Ballislife.com, proved its worth by knocking off the defending national champion Montverde Academy of Florida for the second time this season. Most of the country’s big results, including La Lumiere’s big victory took place at the Cancer Research Classic in West Virginia, where No. 2 McEachern of Georgia also recorded two wins over ranked foes. The changes come towards the bottom as seven new teams join the FAB 50 mix!

In last week’s FAB 50 National Team Rankings powered by Ballislife.com we had a big decision to make as to which program would be No. 1 between La Lumiere (La Porte, Ind.) and McEachern (Powder Springs, Ga.). As we explained last week, one of the three main reasons we went with La Lumiere was its two showdowns with Bishop Gorman (Las Vegas, Nev.) and Montverde Academy (Montverde, Fla.) at the Cancer Research Classic in West Virginia over the weekend.

After winning the Tarkanian Classic in impressive fashion over No. 14 Rancho Christian (Temecula, Calif.), the Gaels were looking to get back into the FAB 50 national title picture by pulling off an upset over La Lumiere. It wasn’t to be, as the Lakers’ jumped out to a 35-21 halftime lead and came away with a 67-54 win. Mr. Basketball USA candidate Isaiah Stewart and Keion Brooks each recorded a double-double, with Stewart going for 22 points and 12 rebounds and Brooks 22 and 11.

The next evening, La Lumiere had its big rematch with No. 3 Montverde, which it knocked from the top spot courtesy of its 58-51 victory at the Iolani Classic semifinals in December. The Eagles were highly-motivated and did a good job defensively on Stewart and Brooks, limiting them to a combined 20 points, but other players stepped up for coach Patrick Holmes. In particular point guard Wendell Green Jr. was excellent in the Lakers’ 64-51 victory over Montverde Academy with nine assists, eight points, eight rebounds and three steals.

Despite the loss, Montverde Academy remains at No. 3, as it owns a win over No. 4 Sierra Canyon (Chatsworth, Calif.). Gorman’s second loss of the weekend to unranked Gonzaga (Washington, D.C.) meant a 16-spot drop for coach Grant Rice’s team behind the Guyer (Denton, Texas) team it lost to at Hoophall West in Phoenix and in front of the Gonzaga Prep (Spokane, Wash.) team it defeated at the same event.

Rancho Christian has now done enough to now be ranked ahead of the Gorman team it lost to 61-39 in basically what amounted to a road game. The Eagles, led by USC-bound Isaiah Mobley and his younger brother, 7-foot junior Evan Mobley, square off against Mr. Basketball USA candidate James Wiseman and No. 26 Memphis East (Memphis, Tenn.) this Friday in West Memphis, Ark. on ESPN2. Less than 24 hours later, they play state-ranked Santa Margarita (Rancho Santa Margarita, Calif.) back home in Southern California at their own showcase. It will be a big upcoming three weeks for Ray Barefield’s team, as Rancho Christian faces No. 2 McEachern (Powder Springs, Ga.) at the Hoophall Classic in Springfield, Mass., on MLK Monday then participate in the Montverde Academy Invitational the following weekend.

McEachern was hoping that Montverde Academy won the rematch with La Lumiere to stake its claim to the No. 1 spot, but the result of that game almost didn’t matter for the Indians. They had their own rematch with then No. 8 Imhotep Charter (Philadelphia, Pa.) at the Cancer Research Classic, the team it beat for the City of Palms Classic title in December, and trailed by 15 points at halftime. McEachern gutted out a 62-58 win, as point guard Sharife Cooper led the comeback win. Although still a junior, he’s making a good case for All-American status, as he sparked a 25-11 third quarter advantage with scoring and play-making. Cooper had 20 points after intermission and finished with 25. McEachern also defeated then No. 34 Findlay Prep (Henderson, Nev.) at the event.

Will the Indians and La Lumiere enter GEICO Nationals unbeaten as the top two seeds? There are still plenty of games before that scenario becomes a reality but both clubs are looking strong right now.