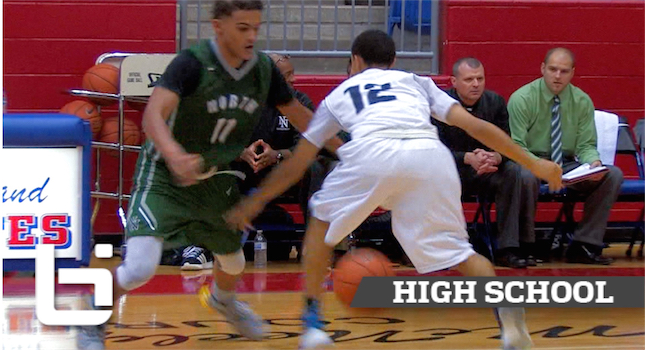 The playoffs are getting under way around the country and that means tough upcoming match ups for the nation’s elite high school teams. In fact, there ...(Read more)

The playoffs are getting under way around the country and that means tough upcoming match ups for the nation’s elite high school teams. In fact, there are seven newcomers in this week’s FAB 50 National Team Rankings powered by Ballislife.com, as teams fell in their region, district or conference tournament. Some will have an opportunity to bounce back, while others such as Garfield of Seattle, Wash. moved up after avenging an earlier loss. Does your squad have what it takes to win a state championship and crack the FAB 50?

After it lost 76-69 in a Metro League showdown to city rival Rainier Beach (Seattle, Wash.) on February 2, not only did we keep the team at Garfield (Seattle, Wash.) ranked ahead of the Vikings, we didn’t drop them from last week’s FAB 50 National Team Rankings powered by Ballislife.com. Garfield had the stronger overall resume, with its only other loss to FAB 50 No. 10 DeMatha Catholic (Hyattsville, Md.).

We knew there was a good chance the two clubs could meet for the Metro League championship and on February 12, the two locked horns again with Garfield coming away with a 65-63 win to capture its first Metro League championship since 1991 and avenge the loss ten days earlier. In a close game that came down to foul shooting, Garfield junior Jaylen Nowell nailed two with 7.7 seconds remaining to put his team up four points. Nowell paced the Bulldogs with a game-high 25 points, while fellow elite junior Daejon Davis added 19 for the winning club.

After falling from No. 11 to No. 38 in last week’s FAB 50, Garfield is back up 14 spots this week to No. 22. Avenging wins are a big factor in our rankings criteria, especially when a team otherwise has an exceptionally strong resume. Similar to Garfield last week, Penny Hardaway’s team at Memphis East doesn’t drop out of the rankings after a tough defeat, in its case a 71-70 loss to Germantown (Germantown, Tenn.) in the SCIAA Class AAA County Championship game. The Mustangs drop 25 spots to No. 35, one spot behind unbeaten Blackman (Murfreesboro, Tenn.). A couple of key national results in its favor had Memphis East steadily climbing in the FAB 50, but the Blaze now deserve major rankings credit as an unbeaten team. Blackman was also ranked ahead of Memphis East in the Associated Press Class AAA State Poll even before the Mustangs’ second loss.

Other high risers this week besides Garfield and Blackman are unbeaten Edmond North (Edmond, Okla.), which is up four spots to No. 27, and Advanced International Prep (Dallas, Texas). API, which is up six spots to No. 37, has a high loss count, but the talented club is meshing better now than it did during the holiday tournaments and has won 15 consecutive games. The Bulldogs have also split games with Hillcrest Academy of Pheonix, Ariz. and Prolific Prep (Napa, Calif.), the latter which handed Memphis East its first loss of the season.

We looked hard at the resume of Germantown for a possible spot in the FAB 50, but the Red Devils’ lost 75-63 to Jonesboro (Jonesboro, Ga.) at the Memphis vs. Atlanta Roundball Classic held in Memphis. That allows Jonesboro to break in at No. 47 as one of the seven newcomers this week. The only in-state loss for Jonesboro, led by elite junior M.J. Walker, is to Norcross (Norcross, Ga.), which fell out of this week’s FAB 50. Jonesboro’s other losses to FAB 50 ranked teams were against No. 3 Oak Hill Academy (Mouth of Wilson, Va.) and top-ranked Chino Hills.

This week’s top newcomer is No. 36 Patrick School (Elizabeth, N.J.), which gave Chino Hills all it could handle before falling to the Huskies in overtime in the title game of the City of Palms Tournament in Ft. Myers, Fla. A review of the Celtics’ schedule includes wins over No. 18 Chaminade (St. Louis, Mo.), a split with talented Roselle Catholic (Roselle, N.J.), with its other three losses to No. 5 St. Anthony (Jersey City, N.J.), No. 16 La Lumiere (LaPorte, Ind.) and post-grad program St. Thomas More of Connecticut.