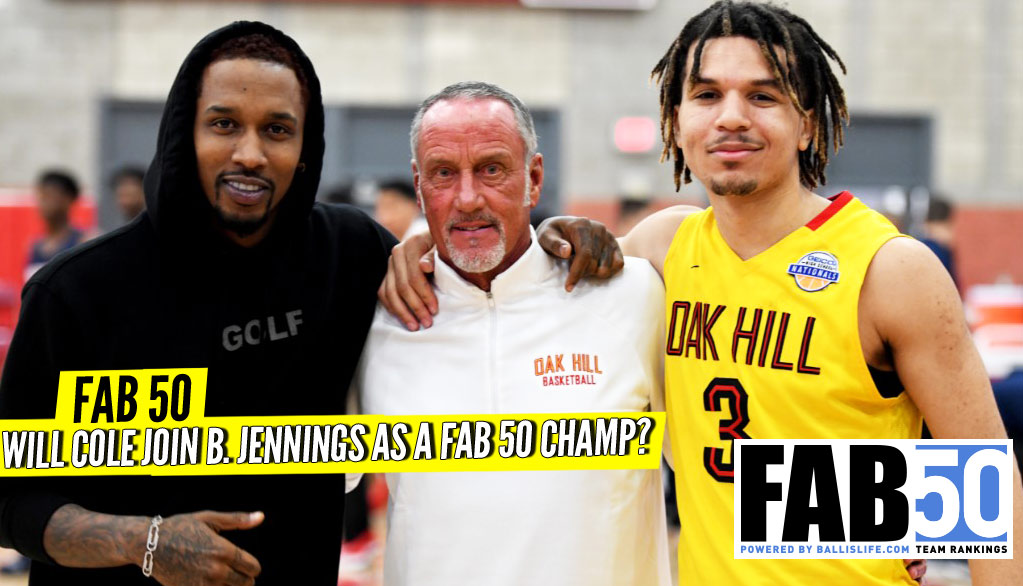 As the playoffs near, the real contenders for the mythical FAB 50 national championship are beginning to separate themselves from teams simply having excellent seasons. That ...(Read more)

As the playoffs near, the real contenders for the mythical FAB 50 national championship are beginning to separate themselves from teams simply having excellent seasons. That was evident at the Montverde Academy Invitational Tournament, as the No. 3 ranked and host Eagles captured the championship and knocked two teams from national championship consideration. This week’s results yielded three newcomers, including No. 35 Vashon of Missouri, which took third place in the MAIT, and No. 40 Fairfax (Los Angeles), which downed its archival to move in to the deepest set of rankings in the industry.

Many teams use the short week that follows MLK Weekend to recoup and return to league action and prepare for the post-season. For the nation’s truly elite programs, however, there is really no rest as major showcases dot each weekend leading up to various state tournaments. For Wasatch Academy (Mt. Pleasant, Utah) and Rancho Christian (Temecula, Calif.), the Montverde Academy Invitational Tournament in Florida offered a chance to establish themselves as serious contenders in the FAB 50 National title race.

What ended up transpiring was the field of bonafide No. 1 contender shrunk, as host and FAB 50 No. 3 Montverde Academy (Montverde, Fla.) crushed Rancho Christian (Temecula, Calif.), 79-56, in Saturday’s title game. McDonald’s All-American Precious Achiuwa led the way with 23 points and was named tournament MVP. Wing Cade Cunningham and guard Harlond Beverly also made the all-tournament team. Rancho Christian was actually able to move up in this week’s FAB 50 because Montverde Academy has also easily dispatch No. 6 Sunrise Christian Academy (Bel Aire, Kan.) and defeated No. 8 Sierra Canyon (Chatsworth, Calif.) twice by sizable margins.

Cole Anthony already pulling up from NBA range like it’s nothing.. He’s too nice! @The_ColeAnthony pic.twitter.com/qUTQdkddlB

The other reason Rancho Christian was actually able to move up after the title game loss is Wasatch Academy came into the MAIT unbeaten, but had its bubble burst in a 74-47 semifinal loss to the California club. Top-notch junior Evan Mobley led the way with 20 points, as the Eagles handed Wasatch Academy its first loss of the season. We actually evaluated Wasatch Academy the week before and it had trouble with a pedestrian Santa Monica (Calif.) team and barely escaped with a victory over bubble club Clark (Las Vegas, Nev.) on MLK Monday, so we actually dropped the Tigers two spots last week even though they were still unbeaten at the time.

New No. 40 Fairfax (Los Angeles) downed Western League rival Westchester (Los Angeles), 50-48, as UNLV-commit Ethan Anderson netted 23 points and senior Robert McRae III nailed two free throws with 23 seconds remaining to seal the victory. Westchester came into the game ranked No. 23 and falls down to No. 44. From a national perspective it may look odd the drop the Comets behind a few teams it deserves to be ranked ahead of, particularly No. 28 Scott County (Georgetown, Ky.) and No. 29 Cox Mill (Concord, N.C.), but coach Ed Azzam’s club must be ranked behind its rival for now but it could all change as the two teams lock horns again on January 31. Should Westchester win the return match and not lose another game this week, it would then go back in front of those teams it bested at the Beach Ball Classic in South Carolina.

The results this week also cause Centennial (Corona, Calif.) to make a big jump up in the rankings to No. 33 after breaking in last week. The underclass-dominated Huskies handed Fairfax its only loss so far, and have only lost to Sierra Canyon and to Rancho Christian twice. One of those losses was by only two points, so Centennial definitely deserves to be ranked ahead of Wasatch Academy.

Rancho Christian and Sierra Canyon will lock horns this weekend at the Battle of the Valleys Showcase in Southern California. Similar to Westchester and Fairfax in the L.A. City Section Open Division playoffs, those two clubs could (and are likely to) meet again in the post-season.

Will the loser of that game deserve to stay ranked ahead or be dropped below fast-rising Salesian? The Pride are the favorites to represent NorCal in the CIF Open Division championship game March 9 in Sacramento. Salesian remains undefeated and is up nine spots in this week’s FAB 50.