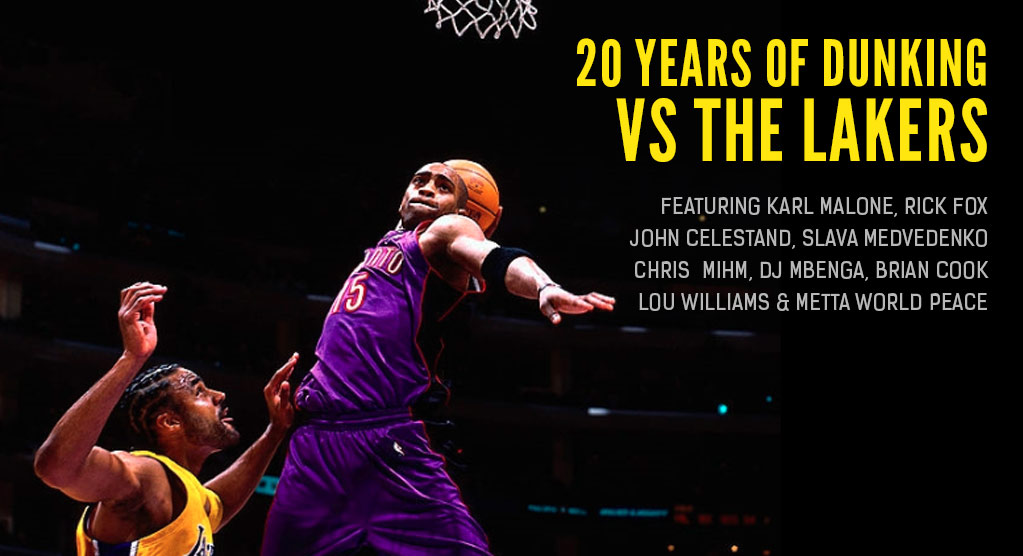 Please stop saying Vince Carter is “turning back the clock” every time he dunks. People have been saying that for the past five or so years ...(Read more)

Please stop saying Vince Carter is “turning back the clock” every time he dunks. People have been saying that for the past five or so years even though it’s a common sight to see the 40-year-old (41 in a couple of weeks) GOAT dunker take flight around a bunch of players that were still being breast fed when Vinsanity reigned in the NBA.

I prefer to celebrate each of his twilight dunks by turning back my clock and remembering similar or great dunks he had against the team he just dunked against. On Tuesday, that team was the LA Lakers, the franchise that used to have the only NBA player Vince always wanted to posterize but never did. He tried once and it turned out to be a mistake…

Carter first great (and arguably greatest) dunk against the Lakers came in 1999, when he crossed John Celestand (remember him?) and threw down a tomahawk dunk between Big Shot Bob, Coach Brian Shaw and Pretty Rick Fox. The dunk became an 8×10 favorite among autograph seekers and was featured on the cover of ‘Hoop’ magazine with the headline: Air Canada: Vince Carter is taking the Toronto Raptors to new heights.”

On December 19th, 1999, Carter and Dell “I made Steph” Curry almost made one of the greatest inbound alley-oops of all-time. The off-the-backboard miss was so impressive the Lakers bench even reacted.

On March 7th, 2001, Carter missed a three, which was saved by Charles Oakley, who threw it back to Vince, who blew past Shaq and threw down a nasty one-hand dunk over Rick Fox, who was now sporting cornrows.

Unfortunately, a few fans in the unaffordable seats didn’t get to see the dunk because they were trying to get Charles Oakley off of them.

A year later, Carter added Slava “Not a fan of Stephen A. Smith” Medvedenko to his portfolio during a 2002 dunk exhibition.

During the 2000 All-Star weekend, Karl Malone told Vince Carter he wouldn’t pay to watch a player play but he would pay to watch him. It was the ultimate compliment from the future Laker. And in 2003, Carter showed his gratitude by posterizing the legend.

As a member of the “I Hate The Mailman” club, I would have paid a lot of money to see this live.

In 2005, during his time with Jason Kidd and the Nets, Carter caught this alley-oop over Brian Cook a few minutes after having a little heated exchange with former AAU (and almost UNC) teammate Kobe Bryant.

A few years later (2008), Carter did to Lakers 7-footer DJ “I like Tacos” Mbenga what he always wanted to do to Shaq.

Carter also added Chris Mihm to his collection of 7-foot white centers that were drafted too early (7th).

In 2013, Carter was now a member of the Dallas Mavs and playing alongside fellow 1998 draft pick Dirk Nowitzki. On this night, Carter followed up a block on Metta World Peace by driving past the defensive great and dunking in the middle of a bunch of Lakers with no intentions of playing defense.

Just in case someone wants to say the title of this post is 20 years but Carter’s first dunk against the Lakers was 19 years, my response is 20 sounds better than 19 and Carter’s 1998/99 rookie season started late because of a stupid lockout. So Carter’s first game wasn’t until February of 1999, but, I guarantee Carter would have had a nice dunk against the Lakers if they played in 1998 because Carter had a nice dunk against every single team during his rookie season.