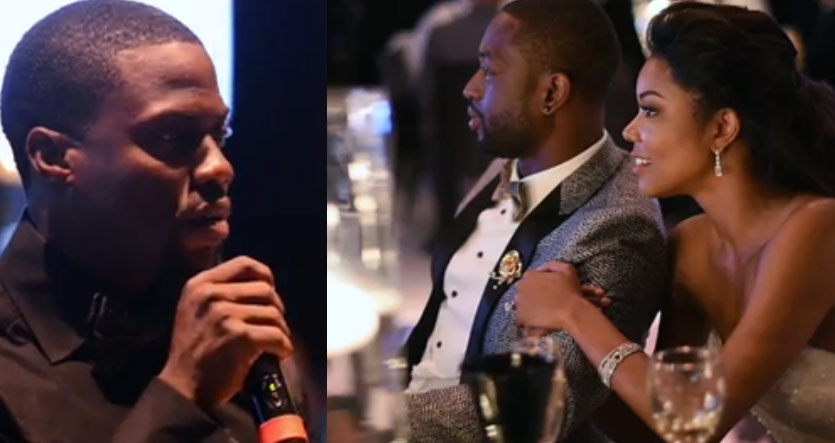 Here’s a truth nobody wants to hear. Unless we are family (with exceptions), we don’t want to watch your overlong, overdramatic, disgustingly sappy wedding video. We ...(Read more)

Here’s a truth nobody wants to hear. Unless we are family (with exceptions), we don’t want to watch your overlong, overdramatic, disgustingly sappy wedding video. We only watch them because we are friends and/or co-workers who felt obligated to do so.  Now, if you had Kevin Hart in it and the love interest is Gabrielle Union and we had some athlete cameos then we probably would watch it.

As part of their 1 year anniversary, Gabrielle Union and Dwyane Wade shared their wedding video which was re-edited to resemble a Rom-Com movie trailer – and yes it had Kevin Hart in it to provide the comedy – called ‘The Wade Union.’  It had all the generic things we expect from a Rom-Com starring Gabrielle Union….except Morris Chestnut who co-starred with her in The Brothers, Two Can Play That Game,  Breakin’ All The Rules and The Perfect Holiday.

If that wasn’t enough for pop culture fans, on their 1 year annivesary, Wade posted a pic of him with his beautiful wife and quoted some Jay-Z.

But today, I got my thoroughest girl with me, I’m mashin the gas she grabbing the wheel, its trippy how hard she rides with me- the new Bobby and Whitney the only time we don’t speak is during “Sex and the City” she gets Carrie fever, but soon as the show is over-She right back to being my solider cause mami’s a rider, and I’m a roller put us together how you gone stop both us. 8-30-14 Happy 1 year Anniversary!!! #thewades