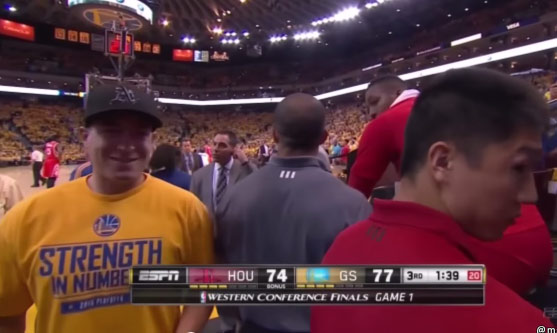 The Rodney Dangerfield of the NBA was once again shown no respect and insulted by a fan. But unlike the LA fan who Dwight told to ...(Read more)

The Rodney Dangerfield of the NBA was once again shown no respect and insulted by a fan. But unlike the LA fan who Dwight told to “come out here” onto the court, this Warriors fan walked right up to Dwight, who was riding a stationary bike in the 3rd quarter, and talked some smack to him. It wasn’t clear if Dwight said anything but the fan then said “f****in f??? (some think he said foul)” as he was walking away and right before getting a little shove from a security guard.

You can blame it on the alcohol (Jaime Foxx electronic voice), blame it on the pride of DubNation or blame it on the fact that Dwight just isn’t the most well liked player in the league. I can’t think of an All-Star in recent memory who has been called more names than Dwight. Even nice guy Durant called Howard a p#$$y earlier in the season.

Or Skip Bayless telling Dwight to his face that he looks like Tarzan and sometimes plays like Jane.

Ouch! For the Rockets’ sake, let’s hope Jane’s knee injury from GM1 isn’t serious and Tarzan shows up for GM2 because Houston has a problem right now.